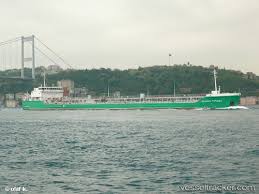 15 August 2018, News Wires — Some Russian ships have stopped transporting cargo to Ukraine, deeming it risky after a Russian tanker was detained in a Ukrainian port as Kiev made good on sanctions against Moscow, two sources at shipowners said.

It is the latest fallout from Russia’s annexation of the Crimea peninsula in 2014 and the emergence of a pro-Moscow insurgency in eastern Ukraine.

The Mekhanik Pogodin oil tanker, under the Russian flag, has been moored in the port of Kherson since Aug. 10, Reuters ship tracking data shows.

A spokeswoman for a regional unit of the Ukrainian state security service (SBU) said the tanker had been detained in the port and prevented from offloading because its owner is on a list of sanctions imposed by Kiev.

“We are just following the law, the presidential order, which has approved the (sanctions) list… I think this is the first (detention) of such kind,” Veronika Frolova said.

The vessel is owned by VEB-Leasing, part of Russian banking group VEB and among Russian companies subject to sanctions imposed by Ukraine in May as a response to “Russian aggression in Ukraine”.

The tanker was leased by V.F. Tanker to carry diesel from Turkmenistan to Ukraine on behalf of the Canadian company Oil Marine Shipping and Chartering Inc., the captain, Mikhail Zamyatin, said via a statement sent by V.F. Tanker, one of the largest shipping companies in the Black Sea and the Sea of Azov region.

VEB-Leasing declined to comment. The Russian Ministry of Transport did not respond to a request for comment.

Reuters tracking data shows that some Russian vessels that are not subject to sanctions are still bound for Ukrainian ports.

However, industry sources said that other Russian shipowners which are also not subject to sanctions have now stopped shipping to Ukraine for fear of losing their cargo.

“Of course we won’t go to Ukraine, we have suspended the shipments for now. If needs be, we will be searching for other destinations,” a shipping industry source told Reuters.

Ukraine’s presidential office imposed sanctions on more than 700 mostly Russian companies, including VEB Leasing, in May. Those entities – including banks, transport, media and defence companies – were banned from doing trade in Ukraine and their assets in Ukraine would be seized, it said.

Many Russian companies have already sought to wind up their Ukraine-linked activities due to earlier sanctions since the Crimea conflict in 2014.

Russian ships typically carry oil products from Turkmenistan via Russian ports and the Sea of Azov to the Ukrainian ports of Odessa, Kherson and Nikolayev during summer, partly by river.

They also ship sunflower seed oil from Ukraine, and those operations have also been suspended, according to the sources.

“No one wants their ship to get stuck (in Ukrainian waters) with a cargo, which had been paid for,” another source at a Russian shipping company said.

V.F. Tanker, in its statement, said Mekhanik Pogodin’s captain was still on the ship as the Kherson harbour master had barred the vessel from leaving the port. The harbour master declined to comment when contacted by Reuters.

Ukraine’s coast guard detained a Russian fishing boat, Nord, in the Sea of Azov on March 25, accusing the crew of entering “territory, which has been under a temporary occupation”. The crew was released, but the boat is still detained.