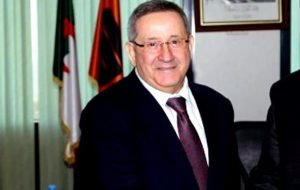 01 May 2018, News Wires – Algeria’s state energy firm Sonatrach said on Monday it boosted its gas output by 5 percent to 135 billion cubic metres in 2017, marking the first time the company has used a news conference to disclose production data.

Sonatrach’s CEO, appointed a year ago, has been trying to overhaul the company, a sprawling and secretive empire not used to change, and increase transparency as the North African country wants to attract more investment.

Oil production fell 3 percent due to OPEC quotas, he said.

He gave no details of the firm’s future strategy at the news conference, beyond previously stated general messages.

“We need to transform Sonatrach into one of the top five national companies in the world,” Kaddour said. “Less bureaucracy and more professionalism.”

Algeria, a member of the Organization of the Petroleum Exporting Countries and a major gas supplier to Europe, has been hit by a slump in oil prices and struggled to attract investment to help develop new fields and increase existing production.

In December, Sonatrach said it planned to work more closely with France’s Total on offshore, petrochemical, solar energy and shale exploration projects after settling disputes over profit-sharing on oil and gas contracts.

Algeria remains dependent on oil and gas earnings, which provide 60 percent of the state budget, and Sonatrach’s performance is key to the economy.

The country has been working on a new energy law to provide better incentives for foreign firms, which had been deterred by current terms.

But there are still divergent views within Algeria over how hard to push for foreign investment and domestic economic reform to boost revenue and growth.