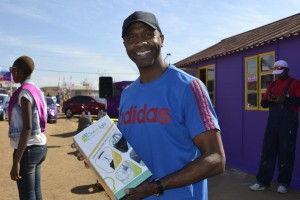 23 August 2014, Johannesburg – South African-based technology company Net1 Mobile Solutions is preparing to roll out the Sun-e-light, a solar-powered lamp which also functions as a mobile phone charger and a wi-fi hotspot, as part of a corporate social responsibility project aimed at opening up the digital world to people in rural areas.

Chief marketing officer José Carlos Da Silva Soares, in a recent interview with SAinfo, said the concept of the Sun-e-light had evolved as the company looked into ways of providing connectivity to rural communities not linked to the electricity grid.

“We began talks with a production company in China which specialises in producing simple yet innovative products to produce a prototype [of the Sun-e-light] for us, which has now been refined and tested over a period of two years,” Soares said.

The result is a lamp with a 3G-enabled modem which acts as a wireless router that can be accessed via wi-fi and potentially even Bluetooth.

Soares said the lamp, which takes eight hours to charge and provides a battery life of up to 16 hours, will be rolled out to communities “in most need of solar lighting and connectivity. We will roll out 2 000 lamps initially, with more to follow once we have an idea of demand.

“We are trying to make acquiring a lamp as easy as possible, and have thus enabled features on our USSD [unstructured supplementary services data] platforms that permit people to request a lamp directly from their mobile phone.”

Soares said the company will make use of the Net1 group’s countrywide distribution network to deliver the lamps as close as possible to the consumer’s location. Net1 Mobile Solutions is a subsidiary of JSE- and Nasdaq-listed Net1 UEPS Technologies.

“Accessibility and connectivity will enable these communities to better themselves and those around them, and this can ultimately lead to a hugely positive spin-off effect,” Soares said, adding: “Our particular focus leans towards learners, entrepreneurs, vendors and job seekers.”

To alleviate the high data costs for users, Soares said they are hoping to partner with other companies and mobile network operators to buy large bundles of data to offer to Sun-e-light recipients on reasonable terms.

The lamps will also be available for sale to the public, for under R300, “and with electricity prices rising by 7% recently, we have no doubt that a huge target market for the solar lamp will be people who would like to save monthly costs on electricity and data,” Soares said.

“If the product roll-out goes well, we will be looking to move manufacturing to South Africa, which in turn should bring more opportunities for employment to locals.”

The company has already begun giving away 2 000 mobile phone charger lamps – an earlier version of the Sun-e-light, which comes without wi-fi. “These will also be for sale [to the public] for around the R250 mark,” Soares said.

“We believe solar power is becoming hugely important. Both public and private organisations are moving towards solar powered initiatives to get off the grid, thereby saving money and reducing pressure on Eskom. It’s also more environmentally friendly, and we can all contribute more to being more environmentally aware and being better corporate citizens.”
*Gabrielle Ozynski – SouthAfrica.info