Johannesburg — The South African rand weakened further on Friday, dragged down by a stronger dollar as Federal Reserve officials continued to talk up the need for further interest rate hikes. 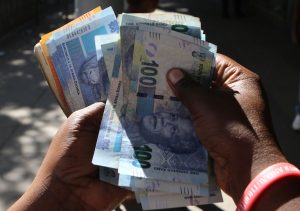 The rand has now lost more than 5% against the dollar this week as the U.S. currency has forged higher on global markets.

A string of U.S. central bank officials said on Thursday that the Fed needs to keep raising borrowing costs to tame decades-high inflation, even as they debated how fast and how high to lift them.

A surprise fall in local retail sales in June (ZARET=ECI) and power cuts by struggling state-owned power utility Eskom have also weighed on the rand this week.