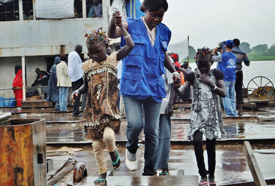 30 October 2012, Sweetcrude/African Press Organization (APO), GENEVA, Switzerland — A convoy of river barges carrying some 900 returnees with their possessions is leaving today from the port of Renk in South Sudan’s Upper Nile State on a two-week voyage to Juba, the capital of South Sudan.

The river convoy is IOM’s 6th this year from the border town of Renk to assist South Sudanese nationals returning from the Republic of Sudan to reach their final destinations. IOM has assisted a total of 36,000 stranded returnees with transport from Renk and other entry points since the beginning of 2012.

While the convoys have reduced the numbers of vulnerable returnees in Renk, there are still an estimated 13,660 in transit camps in the town. Many are desperate to join the IOM barge convoys – the only way to leave during the wet season.

IOM medical staff screen the returnees boarding the barges 72 hours prior to departure to check their fitness to travel and to prevent the spread of communicable diseases. People found to be too ill to travel by barge are offered alternative air travel during the wet season or travel by road during the dry.

Children under the age of five are also vaccinated against measles and polio, and are provided with Vitamin A supplement to boost immunity and a dose of de-worming medication. Medical teams travel on the barges.

In Renk, where IOM runs three transit camp primary health care clinics, health conditions are deteriorating. In the past week, 1,829 returnees have attended the clinics to seek medical help. Since June 2012, IOM has provided medical assistance to 33,785 returnees in Renk.

With the upcoming end of the rainy season, IOM is planning to speed up transportation of returnees from Renk to South Sudan’s western states by making use of over-land routes, subject to adequate security.