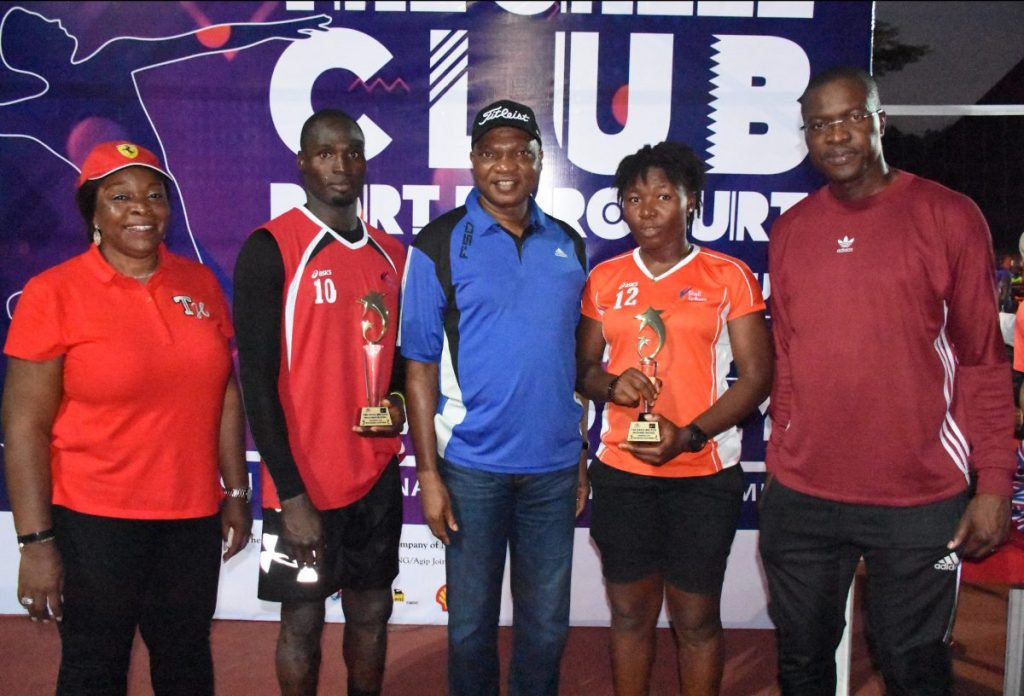 *Country Chairman, SCiN and SPDC Managing Director, Mr. Osagie Okunbor, flanked by the Most Valuable Players in the Invitational Volleyball Tournament for 2019

Speaking to newsmen, SPDC General Manager, External Relations, Mr. Igo Weli, disclosed that the tournament was part of its activities to help the country advanced its performance in sports.

Weli explained that 18 teams from eight states namely, Rivers, Bayelsa, Imo, Anambra, Ondo, Oyo, Enugu and Abuja participated in the 2019 edition, in both the male and female categories.

“So when you talk about contribution to the society, this is also one important way. Of course, we are having fun because it is sport. We have teams today from Rivers, Bayelsa, Imo, Anambra, Ondo, Oyo, Enugu and even Abuja participating in this tournament.

“So you can see almost the entire Nigeria volleyball national teams are here. This is one of the key event in our calendar every year.

“We do this because we believe it helps us to be at our best and also create an opportunity for the country to also advanced its performance in terms of sports.

“We have alot of facilities here, we have hosted the super eagles here and several sports teams here, because we own the facilities here and we make it available to the country, for Nigerians to use it and advanced themselves in terms of sports.”

The SPDC External Relations boss further explained that the company also have similar tournaments for other sports such as golf, football, lawn tennis, etc, pointing out that volleyball remains an exciting game.

He said the company encourages its staff to participate in sporting activities as it was essential for one’s overall well-being.

“We have several sports sections in our Shell club here. We have golf, football, volleyball, lawn tennis, swimming, etc. This is just volleyball, so we also have tournaments from other section, where we have stakeholders from outside coming in to participate.

“Having said that, there is something special about volleyball, it is a game that is full of joy, energy and form. It also helps us to showcase the good sides of Nigeria and Nigerians, that we have talents, wonderful people, we know how to catch fun and we can also compete at the highest levels in sports.

“This also about health and wellbeing, it is our value preposition to make sure our staff are healthy. So we also want them to participate in sports because it is good for the body, mind and mental wellbeing.”

Also speaking, Chairman of the Organising Committee, Efeoghene Ori-Jesu, disclosed that about 200 volleyball players participated in both the male and female teams in this year’s edition.

At the end of the competition, City Spikers of Bayelsa was given N1million cash prize in the female category, while Shell spikers and Trailblazers of Bayelsa who emerged second and third position, got N500,000 and N300,000 respectively.

Similarly, Shell Spikers got N1million in the male category, while City Spikers of Bayelsa and Trailblazers of Bayelsa who emerged second and third position went home with with N500,000 and N300,000 respectively.