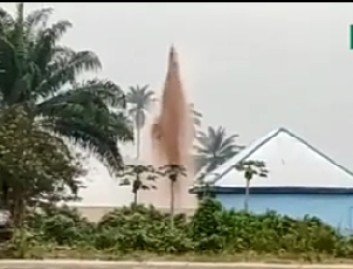 Port Harcourt — The Shell Petroleum Development Company of Nigeria Limited, SPDC, has said that the oil spill which occurred on its 36inch Nkpoku-Bomu trunkline in Rivers State at the weekend, was caused by third party interference.

To this end, the Dutch multinational says its oil spill team are currently at the incident site for containment and oil recovery.

Eye witnesses had said the eruption occurred around 2:00am on Friday, near the Army Shooting Range in Eneka, adding that they were awoken by a thick smoke from the pipeline area before they heard a loud bang.

But SPDC has said that a Joint Investigative Visit revealed that the spill was caused by third party interference, adding that the suspected oil thieves even left behind tools common with illegal bunkering activities at the incident site.

Shell Spokesperson, Mr Michael Adande, in a statement said the company was informed of the spill on that same Friday around 8:30am.

Adande explained that all facility feeding crude to the pipeline has been shutdown, while the impacted line line has been isolated.

“On Friday, November 29, 2019, at about 8:30a.m., the Shell Petroleum Development Company of Nigeria Limited (SPDC) was informed of leak on the 36” Nkpoku to Bomu Trunkline on the Trans Niger Pipeline at Eneka, Rivers State.

“The incident happened on the SPDC Right of Way. SPDC’s emergency response was immediately activated, all feed facilities shut-down, and the impacted line was isolated.

“The incident site was also immediately cordoned off and relevant government agencies were duly informed.

“A Joint Investigation Team comprising representatives of the communities, government regulatory agencies and SPDC carried out incident site assessment and confirmed the cause of leak to be third party interference, with the presence of tools common with illegal bunkering activities left behind at the incident site.

“SPDC oil spill team is already on site for containment and oil recovery. This report will be published on the SPDC oil spill site accessible on the company website.”