on: January 09, 2019In: Community Development, featured 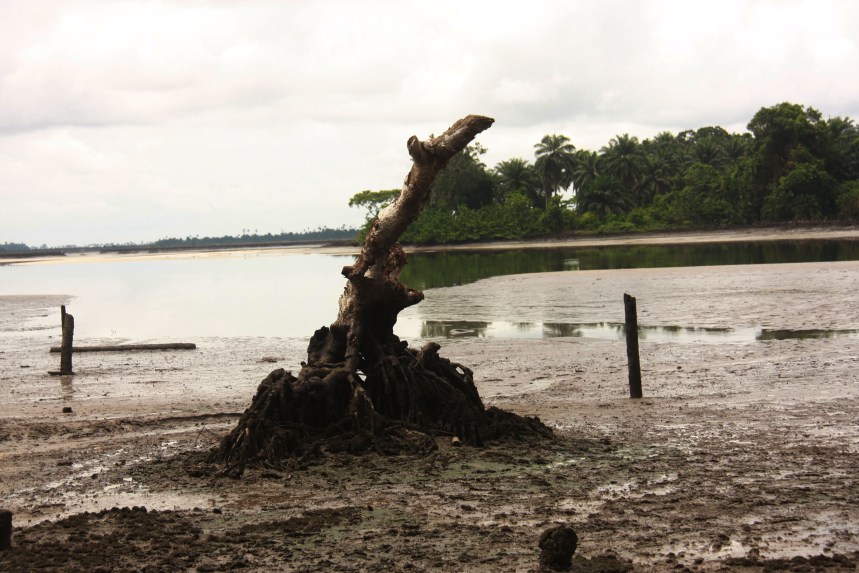 *The effect of the oil spills on the Otuokpoti community.

Recall that a massive oil leak from an oilfield operated by both the Shell Petroleum Development Company, SPDC, and the Nigeria Agip Oil Company, NAOC, had on 2nd November 2016, discharged an unquantified volume of crude into Ekoli Creek around Agbura and Otuokpoti communities in Ogbia and Yenagoa Local Government Areas of Bayelsa State.

Community residents had claimed that crude oil deposits from the spillage, measured about five centimetres thick on the surface of the water, destroyed farmlands and aquatic lives in the communities.

SPDC had on November 7, 2016, through its Spokesman, Mr. Precious Okolobo, confirmed the spill and said the source of the oil leak that polluted Otuokpoti communities in Bayelsa was being investigated.

“The Shell Petroleum Development Company of Nigeria Ltd (SPDC) is investigating reports of a leak around Otuokpiti community waterfront situated downstream the Ekoli River, where a section of SPDC’s Nun River-Kolo Creek Pipeline is buried.

“Preliminary site visits did not indicate any spill. SPDC has, however, shut the pipeline as a precautionary measure pending further investigation,” SPDC had said.

But OGPAEEI, in the petition made available to newsmen, said that while the spill had polluted the Ekoli River and spread the oil discharge across communities along its bank, SPDC restricted its community engagement to Otuokpoti community excluding other communities.

OGPAEEI in its petition addressed to the Director-General of NOSDRA, Dr. Peter Idabor dated Dec. 24, 2018, maintained that SPDC’s response to the incident fell short of industry standards as spelled out in the NOSDRA Act, and urged NOSDRA to compel the oil firm to comply with industry standards in the spill.

The group further urged NOSDRA to compel SPDC to, as a matter of urgency, deploy spill response and containment teams for clean up and remediation of polluted sites, for short and long term, to bring lasting relief to the impacted communities

“This spill affected more than 500 communities in Ogbia, Nembe, Brass, and Southern Ijaw Local Government Areas LGAs of Bayelsa. This is more so because these areas are in ebbs and tides within the floods plain.

“We have not seen and felt a proper procedure of contentment and mitigation of this spill by following international best practices, we have also not seen a report of this spill to appropriate agencies of the Federal Government.

“There was no comprehensive physical ecological and social mapping of the affected areas and ecosystems, we are yet to see any report of NOSDRA and its participation in containment and mitigation of short and long time impact.

“Our call, therefore, is for NOSDRA to compel SPDC to involve the regulatory agency namely NOSDRA and other agencies involved in spill monitoring and management in the site visit to impacted areas.

“We call for immediate comprehensive and holistic mapping of the impacted area in Yenagoa, Ogbia, Nembe, Brass and Southern LGAs, a Joint Investigation Visit could still be done to meet international best practices,” the group said in the petition.