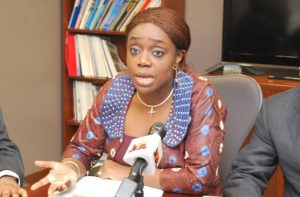 17 September 2018, Sweetcrude, Port Harcourt — A stakeholder and Community Development Expert has said that ex-Finance Minister, Kemi Adeosun’s resignation is not unconnected with her exposure of perceived under-remittance of funds by the Nigerian National Petroleum Corporation, NNPC.

Recall that Adeosun had in June raised the alarm that NNPC was short-changing the country by under-remitting funds to the Federation Account, to the tune of over N70billion, explaining that the figures NNPC was proposing for the Federal Account Allocation Committee, FAAC were unacceptably low.

This revelation led the FAAC meeting in the month of June to end in a deadlock for three consecutive times over the inability of NNPC to present accurate figures and the subsequent postponement of the meeting as well as delayed disbursement of monthly allocation to states.

Speaking to our correspondent, a Community Development Consultant, Mr. Pat Obiene, who wondered why Adeosun’s NYSC certificate scandal did not rear its head since her appointment in November 2015 until after she questioned NNPC on revenue remittance, said the certificate forgery was just a smokescreen to hoodwink Nigerians.

Obiene who is also the Director, Directorate of Modular Refineries, Institute of Environment, said there is a powerful cabal which does not want the public to know what is going on in the NNPC.

According to him, “Before now, the President’s wife had raised the alarm that there is a cabal controlling the government, and if you look very well this cabal is centered on petroleum.

“Kemi Adeosun did not only reveal under-remittance of funds by NNPC but also the Federal Inland Revenue Services, FIRS. Clearly, the cabal holding the country is a strong one and anyone who tries to question the financial transactions in the country makes the presidency uncomfortable.

“Her travails may not be far-fetched from the revelation she made about NNPC and FIRS. Perhaps, because of her character or upbringing, she wanted to ensure financial transactions are transparent to the best of her ability and that there should be some balance between microeconomy, revenue, and income, but it appears the cabal is stronger.

“Perhaps the NYSC certificate scandal is a smokescreen for Nigerians to have something to talk about, her NYSC certificate issue has always been there but why did it come up immediately after she disagreed with NNPC?

“It seems the Presidency is not comfortable with people who have the integrity and character to correct certain wrongs that have been happening in this administration.”