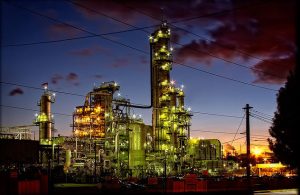 14 November 2018, News Wires — The commercial start-up of Turkey’s new $6.3 billion oil refinery has been delayed until early next year and the plant is not expected to reach full capacity until mid-2019, three sources familiar with the matter said, as tests revealed minor faults.

The 200,000-barrel-per-day STAR refinery, built by Azerbaijan’s state oil firm SOCAR, is set to be a game changer for Mediterranean oil markets and will increase the country’s total refining capacity by just over a third.

The plant was officially opened by Turkish President Tayyip Erdogan in October but it is not expected to start processing crude commercially until January, one of the sources close to the refinery said, as tests are still being carried out.

“They plan to ramp up slowly through the first quarter and it is expected to reach full processing capacity in the second quarter of 2019,” the source said, adding that the start-up has been delayed a few times as tests had revealed small faults.

A second source familiar with SOCAR’s plans said that reaching full capacity could slip even further, into the third quarter.

Commercial production at new refineries, particularly large ones, often falls behind schedule as testing of the various units reveals minor issues that need ironing out.

A SOCAR spokesman said full refining capacity would be reached next year.

“We’ve received two crude oil cargoes and refining is in progress on the plant,” the spokesman said.

SOCAR said at the start of this year the refinery would start up in the third quarter of 2018 with commissioning, or testing, to be complete by the end of October.

STAR is the biggest new refinery to start up in Europe for decades, and Turkey’s first in 30 years. It will transform traditional Mediterranean crude flows once it reaches full capacity, traders said.

Erdogan said at last month’s opening ceremony that the plant’s output would cut Ankara’s fuel import bill by about $1.5 billion per year.

SOCAR plans to supply the refinery with oil from different producers in Europe, the Black Sea region and the Gulf, the head of SOCAR’s trading arm said in an interview last week.

“It may absorb a significant volume of local sour grades and given an outage of Iranian barrels and Kirkuk flow in the market, it may become really tight on the sour side. But the question is how things will look when the actual start-up happens,” a European trading source said.

In September, SOCAR signed a contract with Russia’s Rosneft to supply STAR with 1 million tonnes of Urals crude per year, or about 20,000 bpd.