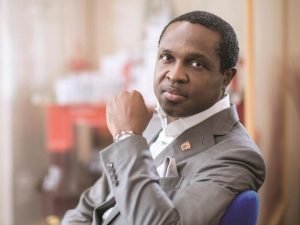 Port Harcourt — The Movement for the Survival of Ogoni People, MOSOP, has warned Sahara Energy, a company belonging to the 2019 governorship candidate of the All Progressives Congress, APC, in Rivers State, Mr. Tonye Cole, to steer clear of the community.

The group said it issued the warning in response to alleged ongoing lobby by the company for operatorship of the Oil Mining Lease, OML, 11, Ogoni oilfields.

Buhari had specifically directed NNPC and NPDC, to ensure a smooth re-entry into OML11 oilfield given the delicate situation of Ogoniland, and also to confirm the assumption of the operatorship by May 2, 2019.

President of MOSOP, Mr Fegalo Nsuke, said Sahara Energy was angling to take over the overatorship of the oilfields, warning the company and its promoters to desist from their lobby as their activities presented threats to the peace and stability of Ogoniland.

“The attention of MOSOP has been drawn to an intensive promotion of Sahara Energy, a company with strong affinity to the Minister of Transportation, Rotimi Amaechi, and the ill-fated governorship candidate of APC in the last election, Pastor Tonye Cole, as a possible operator of the Ogoni oilfields, OML 11.

“MOSOP wishes to state its unequivocal rejection of Sahara Energy and all other schemers including Shell, NPDC/NNPC, BelemaOil and RoboMicheal for the Ogoni oilfields until the fundamental demands of the Ogoni people are properly negotiated.

“We note that the demands of the Ogoni are justifiable and include a fair demand for political rights to self determination which is currently enjoyed by other ethnic nationalities in Nigeria.

“We further urge the management of Sahara Energy to disabuse their minds and bury all intentions to lobby for OML11 as the contentious issues raised by the Ogoni people are yet to be addressed and the issues are far beyond the capacity or any other oil firm to address,” Nsuke said.