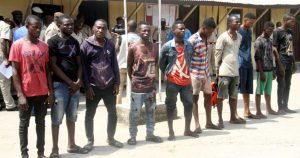 10 May 2018, Sweetcrude, Lagos –  Nigeria’s rating on the International Ship and Port Security, ISPS, Code could be negatively affected by the frequent discovery of stowaways at the nation’s seaports, the Institute of Chartered Ship Brokers has warned.

Speaking at the annual general meeting, a representative of the institute, Mr. Mike Akoh, said the menace of stowaway was one issue that has become a challenge for operators in the industry.

Akoh, in a paper, titled “Challenges of Port Infrastructure on Shipping Business in Nigeria”, noted that infrastructural deficit has led to security challenges thereby allowing free operations of illegal activities.

He said infrastructural deficit has brought security challenges especially in the face of lack of monitoring equipment and facilities.

Similarly, another member of the institute, Mr. Mike Oyewo, disclosed that a major implication of stowaways on the nation’s port industry is the increase of freight rate on cargoes destined for Nigeria.

Oyewo explained that once the international shipping community is aware that a country’s port is prone to high level of stowaways, the tendency is to increase the rate for such country since the ports in that country are seen as danger zones.

“The menace will impact on the Nigerian Maritime Administration and Safety Agency, NIMASA’s, drive on 100% percent ISPS compliance of all Nigerian ports,”, he said, stressing that it will also bring about “increase in insurance premiums, delays in vessel schedule and threat to life of vessel crew”.

Also speaking on the development, the Chairman of the Port Facility Security Officers, PFSO, Forum, Dr. Ignatius Uche, said the issue of stowaways has become a concern for everybody in the maritime industry.

Uche explained that the economic situation in the country has pushed young people to take unnecessary risks such as hiding in vessel’s propeller and containers.