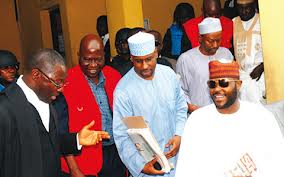 21 September 2012, Sweetcrude, ABUJA — APARENTLY startled by revelations that most of those indicted over the mismanagement of Nigeria’s fuel subsidy regime are sons and relatives of top government officials and politicians, the government might have adopted a subtle method to stop further disclosure of the identities of the owners of the companies indicted by the House of Representatives Ad-hoc Committee on Fuel Subsidy regime.

Findings reveal that the Corporate Affairs Commission, CAC, might have come under pressure from powerful government officials to conceal the data of the individuals and organisations behind the companies implicated in the subsidy probe.

It was gathered that the CAC, which is authorised by law to register and keep the records of registered companies and organisations in Nigeria, had carefully removed most of the affected companies’ files from its shelf and placed a caveat on them.

The files of 87 out of the 143 companies indicted by the Lawan Farouk-led committee had been removed from CAC shelf and put away with a notice that the files were not available for public search.

The order to remove the files from the public and place them in a caveat, took lawyers and other clients of the CAC by surprise.

Most of the lawyers, who daily throng the CAC to conduct searches for their clients, were shocked when they demanded for the files of the companies and were promptly told that they were not available for public viewing.

But in a bid to calm frayed nerves and reduce tension over the strange development, the Registrar-General of the CAC has given an unsolicited explanation that the restriction of access to the data of the affected 87 companies was to protect them from being mutilated.

A terse notice signed by one Jamila Sambo, on behalf of the RG of the CAC, pointed out, “The list of these 87 companies are hereby placed on caveat for reason being that they are files of companies indicted by the Farouk Lawan’s committee that investigated the utilization of PEF.
87 indicted companies’ names missing

“The purpose of keeping them away from the shelf is to prevent possible obliteration of the affected files, “Sambo explained in the memo.

Some of the lawyers who spoke with Vanguard, however, expressed indignation over the strange development, describing it as a means of encouraging corruption at the highest level.

One of the lawyers, Mrs. Carol Wilson, whose business depends on daily scrutiny of firms licenced by the CAC, said it was improper for the commission to shield suspected corrupt individuals and companies from the public.

“No matter what it is, the CAC should avail Nigerians the opportunity to see those behind the rape of our economy via spurious subsidy claims,” the legal practitioner said.

Among the companies, whose files have been placed on caveat, is Nadabo Energy Limited, whose top official, Abubakar Peters Ali Jeldi, was last week declared wanted alongside two others by the Economic and Financial Crimes Commission, EFCC.

Among its major directors at the time of incorporation was Abubakar-Peters Ali Jeldi, who owns 120,000 shares, the son of a former military head of state, with 55,000 shares and a vocal senator from one of the Northern states, with 30,000 shares.

However, for unknown reasons, the former head of state’s son resigned as a director of the company on May 2, 2006 after three others had earlier backed out in 2005.

Surprisingly, the name of Abdul Afeez Olarenwaju Olabisi of Fargo Petroleum and Gas Limited, who was declared wanted by the EFCC in connection with alleged subsidy fraud, is not on the list of directors of the company, which was incorporated on July 19, 2001 with an initial share capital of N1,000,000.

The records show that Olusegun Ogunbambo has the largest share of 950,000 followed by Olamide Ogunbambo with 50,000 shares.

Olugbenda Adesanya who was appointed one of the directors of the company on June 8, 2007, resigned his appointment on January 29, 2008 for undisclosed reasons.

The company made its returns to the CAC in 2010.
Similarly, Ikechukwu Onuabuchi Nworgu of Star Inspection Services Nigeria Limited, who is also wanted by the anti-graft agency, owns the largest share of 250,000 out of the 1,000,000 shares of the company with seven other directors.

His siblings, David and Perpetua, own 240,000 shares while the rest are held by six other directors.

One common thread that runs among the indicted firms is that most of them got their best business deals between 2010 and 2011 when the amount of subsidy payments by the Federal Government leapfrogged from N245 billion to an embarrassing N1.7 trillion, forcing the National Assembly to order a probe.

Meanwhile, it has emerged that the name and registration number of one of the companies, which was recently ordered by the Presidential Committee on
Verification and Reconciliation of Fuel Subsidy Payments to refund the sum of N2.7 billion to the government for excess subsidy claims, cannot be found on the CAC register.

The company, Pinnacle Contractors, allegedly pocketed the huge amount for which mother vessels for the products it claimed to have supplied could not be located in Nigeria or in any part of the world at the time of the shipment.

Repeated checks for the firm’s name at the CAC threw up another company, which also deals on oil and gas, and was initially invited by the Farouk Lawan committee for questioning but is yet to be indicted by the Imuokhuede panel.

The latter has disowned the one indicted and asked to refund N2.7 billion, saying that it has nothing whatsoever to do with the firm.
It is not clear how the PEF, the PPPRA and the NNPC approved the controversial firm and many others to be lifting oil for Nigeria.

The EFCC is yet to begin the trial of the 25 oil subsidy suspects, whose names have already been submitted for prosecution by the Aigboje Aig- Imuokhuede-led Presidential Committee on Verification and Reconciliation of Fuel Subsidy Claims.

The son of the PDP National Chairman and another top politician are among the first batch of suspects said to have made away with billions of Naira for products not supplied.

The politician has nonetheless claimed that his son is an adult, who should answer for his deeds, shunning calls on him to resign on moral grounds.