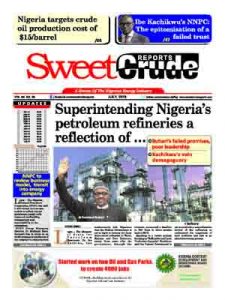 16 July 2018, Sweetcrude, Lagos — The Minister of State for Petroleum Resources, Dr. Ibe Kachikwu, has inadvertently told Nigerians that the Federal government is yet to begin to revamp the three state-owned refineries in Warri, Kaduna and Port Harcourt, nearly three years after the government, through the minister, announced a deadline to “fix” them in three months back in 2015.

Speaking in a recent podcast focusing on “Refineries and Local Production Capacity”, Kachikwu said the Federal Government is yet to conclude a comprehensive review of the refineries to understand the magnitude of their problems and how to go about the revamp process.

But, earlier in September 2015 – four months into the administration of President Muhammadu Buhari – Kachikwu had disclosed the president’s issuance of a directive on the Nigerian National Petroleum Corporation, NNPC, to “fix” the refineries by December 2015 against his own preference for the privatisation or sale of the plants.

“Personally, I will have chosen to sell the refineries, but President Buhari has instructed that they should be fixed. After they are fixed, if they still operate below 60 per cent, then we will know what to do…The 90-day ultimatum for the refineries to be fixed will end in December”, Kachikwu, who was then the NNPC Group Managing Director, had said while addressing journalists in Lagos on September 25, 2015.

He added: “A lot of work is also ongoing to identify what really needs to be done in the refineries, because no comprehensive infrastructural re-kit and re-evaluation has been done, to even tell us what work needed to be done.

“We just knew it (they) was (were) not performing; but what exactly is wrong? Which of the units need to be worked on? As you go from Kaduna to Warri, to Port Harcourt, the challenges are different in those three refineries.

“We needed to have a comprehensive look, different from in-house people. We brought in consultants to take a look at what needs to happen, so that you use that as a basis to negotiate with financiers and contractors.

“That process is largely almost done and we are really hoping by the end of October, we should be in a position to have signed all the requisite agreements and be able to charter people to move in and begin to work.

“If we can by the end of the year get to a point where, at least, we begin the process of actual work, shut down the refineries and begin, then I think we would have achieved the objective of this in terms of beginning to revamp those refineries.”

Industry observers see Kachikwu’s podcast information as another evidence of the minister’s vain demagoguery and a continuation of the government’s many false hopes and failed promises regarding the refineries. An observer, who pleaded anonymity “in order to avoid a clash with the minister”, accuses him of “making uninformed claims and making policy statements before thinking them through”. He also accuses the minister of “making pledges before assessing the capacity to deliver.”

He stated that one of the earliest policies brought out by Dr. Kachikwu was what he called resource co-location by which new private refineries would set up in the same location with the existing NNPC refineries in Warri, Kaduna and Port Harcourt, and share infrastructure with the NNPC refineries. He said the idea later fizzled out because it was not properly thought through by the Minister and his team.

Prior to President Buhari’s December 2015 ultimatum for the fixing of the national refineries, Kachikwu had on different occasions informed that the refineries had returned to production, while at one point, he said the country needed about $700 million to upgrade and fix them.

In the first six months of 2016, following the December 2015 presidential directive, the performance of the refineries was woeful, according to a report by the NNPC. Warri and Kaduna refineries were dormant for five and six months respectively, out of the 12 months of the year. Port Harcourt Refinery managed to operate for 11 months. It did not process any crude oil in September.

In a report released in February, 2017, NNPC reported the consolidated operational performance of the three refineries based on their capacity utilisation at 15 per cent in 2016.

The facilities got 445,000 barrels of crude oil on a daily basis for the 12-month period, but refined less than 15 per cent of this volume on the average.

Specifically, the combined capacity utilisation of the plants from January to December was 13.75 per cent.

The worst performance of the three refineries was in February, after they recorded a capacity utilisation of 1.72 per cent for the month, NNPC said.

The refineries’ best operational delivery with respect to crude refining was in October as they posted a capacity utilisation of 23.53 per cent.

On individual performance, an analysis of the NNPC report showed that Warri Refinery was dormant for five months as it did not refine or process a drop of crude oil in January, February, July, November and December.

Similarly, Kaduna Refinery was down for six months; it failed to process any crude oil in February, March, June, July, November and December.

Nothing could have clearly indicated that the December 2015 directive did not fly and that the refineries remained in the near decrepit state the Buhari government met them. In other words, they were not fixed contrary to the directive of the president.

Continuing with his vain demagoguery and the government’s false hopes, the minister of state for petroleum was to inform, in October 2016, that the government was in talks with oil majors Chevron, Total and Eni to revamp the refineries, after which they would be privatised for greater efficiency.

This was the first official indication that the government had failed in its original target of fixing the refineries by December 2015. It also showed that President Buhari had returned to Kachikwu’s original choice of privatising the refineries.

Meeting with the Senate Committee on Petroleum (Downstream) in Abuja, Kachikwu had insisted that the government would privatise the refineries within 12 months following repairs.

“We have gotten commitments from some of the majors. (ENI’s) Agip has indicated interest to work with us on Port Harcourt, Chevron on Warri. We are talking to Total on Kaduna,” he said.

Kachikwu had previously announced that the NNPC was looking at partnerships or takeovers.

At the 2017 Offshore Technology Conference, OTC, in Houston, Texas, the minister, during a world press conference in the first week of May, stated that Nigeria’s refineries would get investors by September of that year. He explained that the country had snapped up  a sizeable willing investment portfolio for the refineries and that the investors would be made public by September.

“When we came onboard, the refineries were not working, but, as we speak, we have a sizeable investment portfolio for them to an extent that we don’t know who to partner with for the investment.

“By September, we will unveil the investors for the refineries,” the minister said.

The new investors were expected to repair, revamp and maintain the refineries according to the terms and conditions of the contract, Kachikwu had promised, but noted that “when completely repaired, the refineries will not satisfy the country’s consumption need”.

Where the refineries fail to meet the country’s consumption need, Kachikwu said Dangote’s refinery and modular refineries will fill the gap.

Kaduna Refinery, on the other hand, is 110,000 per day plant which produces LPG, PMS, AGO, Household Kerosene, HHK; Aviation Turbine Kerosene, ATK; and fuel oils.

Five months later, in October 2017 – a month after the government ought to have announced the selected investors expected to repair, revamp and maintain the refineries – the NNPC informed Nigerians that it was in hunt for private investors to partner with in its efforts to fix the moribund refineries and fix its pipelines. NNPC’s Group Executive Director and Chief Operating Officer for Downstream Operations, Mr. Ikem-Obih, disclosed this in an interview with a foreign news agency. Ikem-Obih said: “We’re lean on capital, which is why we’re hoping that the private-sector people come and partner with us.”

But if the NNPC is seeking new investors, what happened to the ones Dr. Kachikwu had announced were under consideration which he had also promised to unveil in September last year? Has the government abandoned that list of investors in search of fresh ones or is the NNPC saying the government had failed in its discussion with the investors and in the September target for the announcement of the successful investors?

In yet another hope raising pronouncement, Dr. Kachikwu announced also in October 2017 that 26 firms have indicated interest in revamping the three refineries, saying revamping them would require an investment of $2 billion.

The minister, who spoke at the 24th Africa Oil Week in Cape Town, South Africa, said the government was close to finalising the process for private partners to revamp the refineries, which would lead to the processing of 450,000 barrels per day of crude oil locally.

“We are almost at a threshold of finalising the process of selection,” he said, adding that it could announce its selection by January or February, 2018.

Seven months into the New Year nothing of sort has happened, only for the minister to release his podcast showing that the government is even yet to conclude a comprehensive review of the refineries to understand the scope of the problems confronting them and how to go about the revamp process.

A month later, in November 2017, President Buhari, obviously having forgotten his earlier December 2015 order for the fixing of the refineries, again ordered the NNPC to ensure that the refineries return to “full operational status”. This was disclosed by Dr. Maikanti Baru when he played host to the leadership of the Petroleum and Natural Gas Senior Staff Association of Nigeria, PENGASSAN, at the NNPC headquarters in Abuja. Baru had taken over from Kachikwu as Group Managing Director of NNPC since July 2016. He said funding had been a major challenge in the rehabilitation of the refineries but was optimistic that the various options being explored would yield positive results.

Early this year, there was a report that the NNPC was in the final stages of talks with two consortia that include top traders, energy and oil companies, to revamp the rundown refineries.

The two consortia would be paid via the off take of refined products rather than cash, obliging them to revive the refineries and keep them running smoothly to ensure they earn profit from their investments. The first consortium comprising Vitol, Saipem, General Electric, Sahara Group and MRS Oil Nigeria will refurbish the Warri and Kaduna refineries while the second consortium is made up of Trafigura, Eni, Cepsa and Oando, which will repair the refineries in Port Harcourt, according to the report.

The Minister of State for Petroleum Resources was to make another policy statement to the effect that the refineries will soon undergo revamping and will be ready at most in 18 months. He made the disclosure in a speech at the Nigeria International Petroleum Summit in Abuja, but did not reveal further details.

Kachikwu said the rehabilitation of the refineries would cover 18 months, meaning that it would transcend the tenure of this administration which ends in May 2019. Industry experts don’t see this as a tidy arrangement.

The nation was waiting for action towards the realisation of the two latest pronouncements when Kachikwu informed that the government is yet to understand the magnitude of the problems confronting the refineries and how to fix them.

Therein lies the doubt for industry experts, who are questioning the possibility of handing the plants over to the two consortia and having them complete their work within 18 months, when the government that is awarding the contract is yet to understand the magnitude of the problems confronting the refineries and how to fix them.

Many experts believe that with Kachikwu’s vain demagoguery and the government’s many promises and failure to deliver on the refineries, all that’s ongoing now is the wait for the 650,000 barrels per day capacity Dangote refinery to come on stream.