Tanker drivers call off strike after disagreement  with security agents 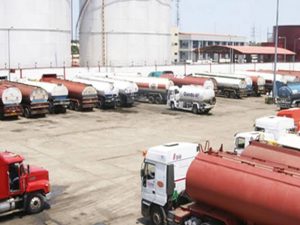 Fuel tankers waiting to load at an NNPC depot

23 May 2018, Sweetcrude, Port Harcourt – Petroleum Tanker Drivers, PTD, have called off their industrial action in Rivers State following the intervention of the Nigerian National Petroleum Corporation, NNPC.
The one-week old strike, which was triggered by alleged constant harassment of tanker drivers by security agents, saw to the gradual returned of fuel scarcity and long fuel queues at filling stations in the state.
The tanker drivers had said that two of their trucks worth N28 million were set ablaze by policemen at Eleme, alleging that the Rivers State Police Command has shown unconcern on the matter.
Confirming the development after a meeting with officials of the NNPC at its state secretariat in Eleme, the Chairman of PTD, Comrade Lucky Etuokwu, said the union decided to call off the strike following the intervention of NNPC to replace the burnt trucks for the interest of peace and harmony.
Etuokwu also called for the immediate redeployment of the Divisional Police Officer of Eleme Police Station, over alleged high-handness.
He said: “We have called off the strike. NNPC has intervened this (Monday) morning and they have decided to take it upon themselves to pay for the burnt trucks.
“Since NNPC has decided to take it upon themselves, if we say we are not going back, the masses will be the ones to bear the brunt.
“We are not anti-police, we just want them to be professional in the discharge of their duty.
“We are also saying that the DPO of Eleme should be redeployed, the man behaves as if civilians were not needed in the society.”
The Petroleum Tanker Drivers warned that if security agents did not stop harassing its members, they would have no choice than to embark on full scale nationwide strike.