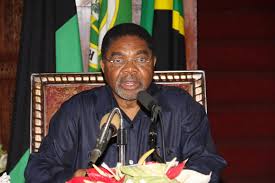 18 December 2016, Zanzibar — President Ali Mohamed Shein of Zanzibar, yesterday signed into law, the Oil and Gas Development/Management Bill, an important step that will empower the semi-autonomous part of the United Repub lic of Tanzania to manage its own natural resources.

The signing of the bill into law brings to an end, weeks of anxiety, with the people, legislators and lawyers embroiled in a heated argument on the legal powers Dr Shein had to sign the new law. Members of the House enacted

The Acting Minister for Energy, Ms Maudline Castico, said many Zanzibaris were eager to see the president assent the bill into law to speed up oil and gas exploration as many also hope that they will get out of poverty after the drilling starts

Also in attendance were Zanzibar Attorney General, Mr Said Hassan Said, ministers and journalists who heard Dr Shein say that he has not broken any law or constitution by signing the documents.

This small team of data scientists has made an algorithm that is turning a giant 19 billion dollar industry up-side-down.
“We were advised well by our legal advisors and the both the attorney general before writing the law and here today I sign it in the open. Some people are just looking for fame by issuing misleading statements,” Dr Shein said, adding that people will have to wait before they benefit because it takes more than five years to develop it.

At least two lawyers in Zanzibar, Mr Omar Said Shaaban and the former Attorney General, Mr Othman Masoud Othman, challenged President Shein to avoid signing the bill into law, arguing that it was against union constitution.

He said despite the fact that one of the sections in the 1977 Union Constitution recognises Oil and gas development as union matter, other laws in the same constitution paved way for the new law and that Zanzibar has no conflict with the union even in political boundaries.

‘We have been moving on well and now we have the law in place. Investors are invited to start exploration,” said Dr Shein who also informed the audience that Latham Island, known locally as ‘Fungu Mbaraka’ lies within Zanzibar territory and there have been no disputes over it.

He said RAK Gas from the Middle East and SHELL companies have already shown the interest to develop Oil and gas in Zanzibar, but more investors were welcome to take part in the emerging oil industry.

Prof Muhongo said after the signing ceremony that Zanzibar was on track in its process of developing the oil and gas resources. “But Tanzanians should understand that oil and natural gas do not recognise political boundaries,” he added.

“For example, there is no way Tanzania can dodge talking with its neighbours like Mozambique, DRC and probably Kenya, because the natural resources do not respect political boundaries.

We cannot enter into conflict because of the wealth,” the energy minister observed.