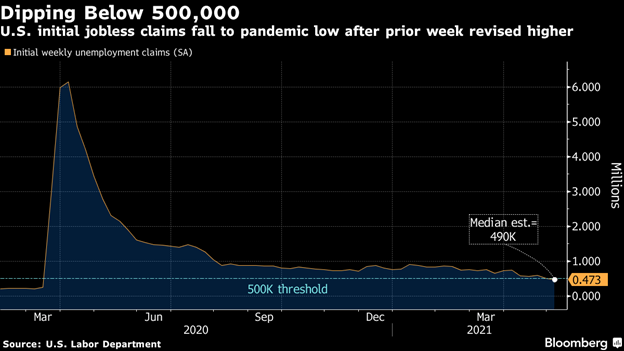 The benchmark S&P 500 rose after posting its biggest one-day drop since February on Wednesday. The tech-heavy Nasdaq 100 also pushed higher, led by Apple and Microsoft. A report earlier showed producer prices increased by more than forecast in April, and jobless claims fell. Bitcoin dropped to around $50,000 as Tesla suspended purchases using the cryptocurrency.

“Taking a step back from inflation, the fact that jobless claims hit another pandemic-era low suggests we’re inching even closer to full reopening, which is no doubt a good thing,” said Mike Loewengart, managing director of investment strategy at E*Trade Financial.

Confidence that reigned supreme until two weeks ago on the U.S. economy and continued Federal Reserve stimulus has been jolted in the past week with non-farm payrolls falling far short of expectations and inflation rising by the most since 2009. While some investors insist the surge in consumer prices is a one-off reopening burst, the broader markets are hedging against the possibility it may persist and force the Fed to consider tapering its stimulus.

“Markets have lost a little bit of confidence that the Fed has control of inflation” and the concern was that the central bank might wait too long to address the rise, Victoria Fernandez, Crossmark Global Investments chief market strategist, said on Bloomberg TV. “I am not sure the market is extremely comfortable with that at this point.”

Tesla gained even after Elon Musk tweeted that Tesla will no longer accept the digital currency for vehicle purchases due to environmental concerns.

Alibaba dropped after reporting fourth-quarter results. While revenue beat estimates, the company posted a net loss after an antitrust fine.

Treasury markets were calmer, with the 10-year rate holding near 1.69%.

Have your say on MLIV’s Question of the Day. Which Assets Hurt If CPI Isn’t Transitory?