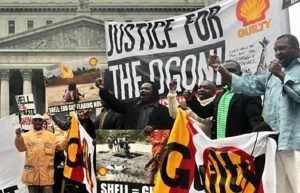 07 March 2018, Sweetcrude, Port Harcourt – Twenty five years after oil exploration activities was stopped in Ogoniland following environmental issues that led to intense crisis by the locals against the Shell Petroleum Development Company, SPDC, and the federal military government of that time, a fresh crisis is looming in Ogoni over planned resumption of oil activities in the area.

Stoking the tension, the Supreme Council of Ogoni Tradition Rulers, the Oil-bearing Communities’ Traditional Rulers in Ogoniland, the Movement for the Survival of the Ogoni People, MOSOP, and the Ken Saro-Wiwa Associates are all in disagreement over the planned resumption of oil exploration and the endorsement of the two indigenous oil companies for operatorship of the Ogoni oil fields.

Recently, the Supreme Council of Ogoni Tradition Rulers endorsed RoboMicheal Limited to commence operation in the Ogoni oilfield while the Oil-bearing Communities’ Traditional Rulers in Ogoniland, on their part, endorsed Belemaoil Producing Nigeria Limited for operatorship of the oil mining lease, which originally belonged to SPDC.

While MOSOP says the endorsement of any oil firm to come into Ogoniland does not in any way represent the wishes of the people, Ken Saro-Wiwa Associates, which allegedly is pushing the agenda of Belemaoil, has accused the leadership of MOSOP of failing the people of Ogoni.

Spokesperson of the Supreme Council of Ogoni Traditional Rulers and Paramount Ruler of Kpite Community, HRH King Samuel Nnee, said the decision to endorse RoboMicheal was sequel to the issuance of licence to the company by the Federal Government through the Nigerian National Petroleum Corporation, NNPC.

Nnee explained that the resumption of oil exploration activities in Ogoniland by RoboMicheal will generate wealth, provide employment for Ogoni indigenes, and also open up the area, which has been impoverished by endless years of environmental degradation, to further investment opportunities.

A resolution reached by the group said that the Supreme Council of Ogoni Traditional Rulers cannot impose RoboMichael on them, since the issuance of an all-embracing license for oil exploration and exploitation was totally out of their reach.

The oil-bearing communities, which affirmed their support for Belemaoil Producing Limited, noted that the unanimous acceptance of Belemaoil in Ogoniland in 2014 was the reason for the issuance of various recommendation letters of the company to various authorities concerned with oil business.

The resolution signed by the president of the oil-bearing communities, Chief Donald Gberesu, further said the communities would reject any intrusion from any quarters in their domestic affairs.

“We, the paramount rulers of oil-bearing communities in Ogoniland are saying in clear terms that we are the landlords of our communities.

We hereby resolved that no one has the right to discuss, negotiate with any investor, be it public or private, without our consent,” Gberesu.

Meanwhile, the Movement for the Survival of the Ogoni People, MOSOP, and the Ken Saro-Wiwa Associates are also on war path over the planned commencement of oil exploration in Ogoni.

MOSOP is not in support of endorsement of any oil firm to come into Ogoniland, but, Ken Saro-Wiwa Associates, which, according to MOSOP, is pushing the agenda of Belemaoil, has accused the leadership of MOSOP of failing the people of Ogoni.

MOSOP President, Mr. Legborsi Pyagbara, says the group “has not and will not endorse any oil company, be it RoboMichael, BelemaOil, NPDC (Nigerian Petroleum Development Company), NNPC (Nigerian National Petroleum Corporation), Shell or any other for the purpose of resuming oil production in Ogoniland, until the issues raised by the Ogoni people are addressed through dialogue”.

Pyagbara called on President Muhammadu Buhari to avert a possible breakdown of the peace in Ogoniland by putting a check to the activities of oil firms scrambling to gain access to resume oil exploration in Ogoni.

But for the Ken Saro-Wiwa Associates, KSWA, the current leadership of MOSOP, led by Pyagbara, has failed the people of Ogoni by not protecting the legacies of late environmentalist, Ken Saro Wiwa.

National Coordinator of KSWA, Chief Gani Topba, alleges that RoboMichael Nigeria Limited and NPDC are proxies of SPDC and should, therefore, steer clear of Ogoniland in the interest of peace. According to MOSOP, however, Topba is pushing the agenda of Belemaoil.

The KSWA leader has not come out to declare support for any of the two indigenous companies. Topba said at the 2018 Ogoni General Assembly: “SPDC’s subsisting lease over OML 11 should be revoked immediately to pave the way for discussions with Ogoni elders and leaders of thought on the demands of the Ogoni people as articulated in the Ogoni Bill of Rights, before the resumption of oil production.

“Also, the unilateral decision of the NNPC to grant approval and operatorship licence to RoboMichael Nigeria Limited to resume oil production in OML 11 on behalf of SPDC without the free, prior and informed consent of the Ogoni people as guaranteed by international law, is brazen and undemocratic as it is capable of igniting fresh crisis in the area,”

It should be noted that Shell Petroleum Development Company of Nigeria left Ogoni in 1993 and has, since then, maintained that it had no plans to return to the area for oil exploration and production.