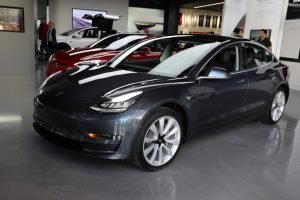 23 May 2018, News Wires – Tesla‘s chief executive officer Elon Musk admitted late on Monday there was a braking issue with the Model 3 sedan, pointed out by Consumer Reports and said it can be fixed with a firmware update that the electric car maker will be rolling out in a few days.

“With further refinement, we can improve braking distance beyond initial specs. Tesla won’t stop until Model 3 has better braking than any remotely comparable car,” Musk wrote in a tweet.

Musk also added that Consumer Reports had an early production car and he would request them to test a newer model.

Influential US magazine Consumer Reports on Monday said it will not recommend the affordable Model 3, seen as key to Tesla’s profitability, as it braked slower than a full-sized pickup truck.

Shares of Tesla were trading slightly up at $286.11 in pre-market trading on Tuesday, after closing up 2.8 percent at $284.49 on the Nasdaq on Monday.