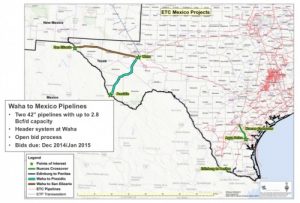 23 September 2018, London — Plains All American L.P. will begin operations on an expanded West Texas oil pipeline on Nov. 1, helping to ease a bottleneck that has weighed on Midland crude prices for months, it said in a regulatory filing.

Booming production in west Texas’ Permian Basin, the biggest U.S. oil field, has overwhelmed existing pipelines to Gulf Coast export markets, driving oil prices to as much as $18 below those at the coast this year. Production in the Permian has nearly doubled in the last three years, to 3.4 million barrels per day (bpd).

The Houston-based pipeline operator this month began filling its extended Sunrise pipeline, which when completed will add 500,000 bpd from Midland to Wichita Falls, Texas, with connections to the main U.S. crude storage hub in Cushing, Oklahoma.

By Oct. 31, the line will be full and “fully operational and capable of providing transportation services” the next day, Plains said in an Aug. 31 filing with the Federal Energy Regulatory Commission that has not been widely circulated. Previously, the company said it hoped to start shipping crude in the fourth quarter.

The notice did not say how much new oil the extended Sunrise pipeline will be able to carry at the outset.

The pipeline will be capable of transporting 360,000 bpd by the first quarter of 2019, enough new capacity that Permian producers can expand production over the following six months, said Kendrick Rhea, a research analyst at East Daley Capital Advisors.

“They’re doing everything they can to get this pipeline online as fast as possible to (allow shippers) take advantage of the differentials in the Permian,” Rhea said.

West Texas Intermediate at Midland on Friday traded at a discount of $11 per barrel to U.S. crude futures, strengthening from the previous day’s $15-per-barrel discount, brokers said.

The Sunrise pipeline expansion “is going to alleviate some of the pressure because Cushing can take all the crude you want,” one trader said, referring to crude storage levels that are less than a third of capacity at the Oklahoma delivery point for U.S. crude futures.