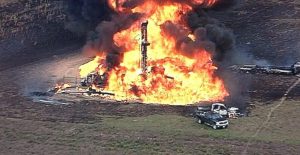 03 August 2018, Houston — Authorities on Thursday were investigating what caused a fire and a series of natural gas pipeline explosions in Midland County, Texas, which sent seven people to the hospital on Wednesday and shut down five lines before being extinguished late in the evening.

Workers and firefighters were responding to a leak when the blast occurred, Midland County Fire Marshal Dale Little said on Thursday. The cause of the original explosions has not been determined, he said.

Five workers with critical injuries were airlifted to University Medical Center in Lubbock, Texas, and were being treated at the center’s burn unit.

One man remained in critical condition and three others were upgraded to serious condition, all with burn injuries, medical center spokesman Eric Finley said on Thursday.

The fifth pipeline worker, a Kinder Morgan Inc employee, was listed in stable condition at the hospital, a company spokeswoman said.

Two firefighters responding to the blaze also were taken to hospital on Wednesday for treatment of burn injuries, said Elana Ladd, public information officer for the city of Midland.

Ladd said the pipeline explosions occurred just outside the city of Midland on a rural road, FM 1379, about five miles (8 km) south of Highway 158.

Marty Baeza, a Fort Stockton, Texas oilfield worker who was working at a site about a half mile (0.8 km) from the explosion, said the blast shook the water-treatment unit where he was working.

“It felt like someone had bumped us,” said Baeza. He went outside and saw a large fireball that lit the sky for about five minutes. Firefighters arrived quickly, he said.

Kinder Morgan’s El Paso Natural Gas (EPNG) line was damaged by the blaze, but service impacts are expected to be minimal, spokeswoman Sara Hughes said in an email. The company believes the problem started with a nearby pipeline.

“There was a third-party pipeline involved that also experienced a failure, and preliminary indications are that the third-party line failure occurred before the EPNG line failure,” Hughes said.

Authorities on Thursday morning said they were not able to identify the operators of the other pipelines affected by the blast.

Oil and gas pipelines crisscross Midland County, which is located in the Permian Basin, the largest U.S. oilfield. The explosions affected five pipelines which share a transit channel and which were all shut in by operators, a Midland city official said on Wednesday.

Gas prices at the Waha hub, in the Permian basin, increased by 13 cents, or about 6 percent, on Wednesday to $2.23 per million British thermal units, although much of the trade that day would have occurred before the fire, which started at around 11:14 a.m. CDT (1614 GMT).

Thomson Reuters data showed that as of Thursday, the explosions had not affected overall flows of natural gas in Midland County, including on Kinder Morgan’s EPNG pipeline.