The day ‘Hulk Hogan’ took me to Owerri

on: February 11, 2020In: Community Development, featured 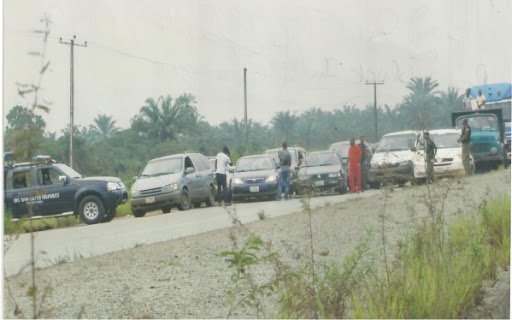 Port Harcourt — I had the good fortune of travelling from Port Harcourt to Owerri by road on 8th February 2020, and ended up with lessons that belong to the make-believe realm of Nollywood, Hollywood or Bollywood, depending on your nationality or preference. For a journey that I wanted to be free from frills and full of everyday thrills, it had to begin at the vehicle terminal, which people with better knowledge have renamed motor park, so I went to a very busy one. No sooner had the vehicle taken off than someone reminded us of how lucky we were to safely travel from the Garden City to Owerri by road. He blamed the situation on the “bad boys” who he said mounted and sustained a campaign of kidnap and robberies on the route until the law enforcement agencies and community vigilantes drove them out. As I sat in grateful relief, I chewed over the implications of this person’s statement. In fact, “this person” was the driver, a fellow blessed with a ‘Hulk Hogan’ frame who ran enthralling commentaries on politics and everything else. Hulk (as I choose to call him now that he can no longer reach me) filled the driver’s seat with his hulk and he was in charge of the vehicle literally and figuratively.

From Port Harcourt, we took the Ubima route to Imo State. In case you don’t know, Ubima is the hometown of two former governors of Rivers State – Rotimi Amaechi and Celestine Omehia. “This is Amaechi’s father’s house,” Hulk said with striking familiarity, as he pointed to a nondescript bungalow. A few seconds later, he said “…and this is Omehia’s father’s house.” And that got me wondering on how politics divide what nature has brought together. Amaechi and Omehia are two implacable political enemies, and yet from the same community. As I was not in the mood for a commentary on politics in Rivers State, I kept my thoughts on this anomaly to myself.

My thoughts were soon interrupted by a banter between the driver at one of many check points we encountered. As we were flagged down yet again, I blamed myself for not counting the number of security posts when we began the journey. So I asked Hulk how many they were from Port Harcourt to the Imo State gate. “28,” he responded with an air of finality. “Without them, we won’t be driving this way,” he said as he looked set to continue with a lecture on security challenges in this axis of the South South. What interested me more however, was the transaction at every check point. As we slowed to a halt, Hulk will exchange greetings and pleasantries with a smiling armed man who will peer into the vehicle. At some points, the exchange was in vernacular. Without fail, Hulk, on the driver’s seat, will stretch his left hand to the security person in what resembled a handshake, and we will be free to continue our journey. Never at any time did anyone ask for his driving license and vehicle documents or search us. Perhaps, they trusted Hulk as a very honest Nigerian; perhaps Hulk was a good man and it was written on his face; perhaps Hulk was a part time law enforcement agent; perhaps…

We were now in Imo State. I heard Hulk and a passenger lament on how “number four can now become number 1.” The good thing with being in a public vehicle is that you could join a conversation or argument without invitation. If you heard it, you were welcome to contribute, and no one in their right sense will ask you to mind your business. My people were talking about the Imo State gubernatorial debacle, where the PDP’s Emeka Ihedioha was ejected by the Supreme Court from Government House, Owerri for the APC’s Hope Uzodinma. Their talking point was emotional: Emeka won the election; Hope came a distant 4th but the Supreme Court has overturned the “will of the people.” I jumped in, saying they missed the point. Hope was relegated to the 4th place because results from 388 wards were omitted, and the Supreme Court said it only corrected this fatal error. And when an error of this magnitude is corrected, it begs the question that the outcome and standing of the candidates will change fundamentally. I told Hulk and my travelling companions that I was not a party man or a politician, but a Nigerian yearning for the day we will have free and fair elections. They became silent and nodded in agreement. And just then we arrived at the gates of Owerri. Someone drew our attention to a giant billboard which showed the candidate of the Action Alliance, Henry Nwosu congratulating Hope Uzodinma, and pledging to work with him on his victory. Again, in case you didn’t know, Henry, the son-in-law of the immediate past governor and now senator, Rochas Okorocha, was the favoured successor. Rochas did everything a human could do to install the young man, to the point that, when the APC leadership disagreed with him, Henry defected to the Action Alliance. Rochas was suspended from the APC, and reinstated only recently. Both father-in-law and son-in-law worked against their former party in all ways imaginable. They excoriated Hope and berated his claim and fitness for office. As we saw Henry’s advertisement congratulating the same man, we all chorused spontaneously “hypocrisy!”

It was now time for me to alight from the vehicle, and Hulk said to me “go well.” I said to Nigeria in my heart “it is well.”