This is NNPC of my dreams — Marinho 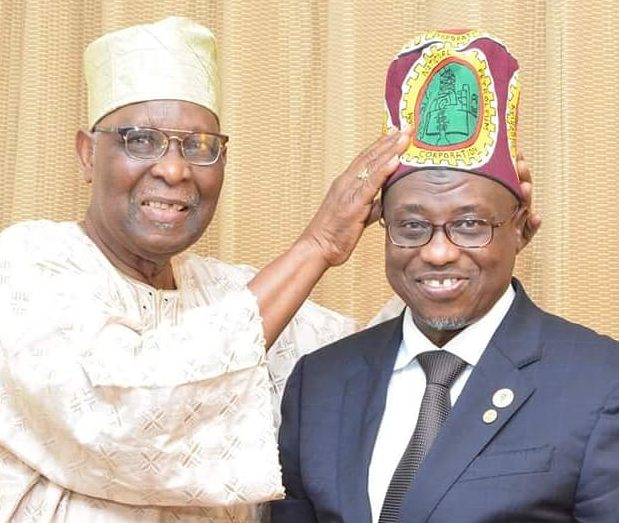 *Pioneer Managing Director of the NNPC, Chief Festus Marinho and Dr. Maikanti Baru, the current GMD of the NNPC.

23 March 2018, Sweetcrude, Lagos — Pioneer Managing Director of the Nigerian National Petroleum Corporation, NNPC, Chief Festus Marinho, Thursday, commended the management and staff of the corporation for allowing its dreams for the firm come into fruition.

Speaking during a visit to the Group Managing Director of the NNPC, Mr. Maikanti Baru, Marinho also commended them for emplacing NNPC on the path of prosperity.

He stated that despite the numerous problems and interferences faced by the corporation, the Baru-led management has kept its head straight, refusing to be cowed despite the difficult operating environment.

He said, “Following developments from outside, one cannot but be proud that to a large extent, one’s dream for the NNPC is unfolding. You are making tremendous progress.”

Marinho expressed awe at the pace with which technology was impacting the oil and gas industry, stating that 2D seismic data acquisition started during his stewardship over 40 years ago.

According to him, when the 3D seismic acquisition came up, everyone was overjoyed.

“I don’t know how much ‘D’ seismic acquisition you are doing today, but I know a lot of progress has been made. Although technology is now more complicated, I think the beauty of it is that we are getting as much out of NNPC as one would have thought possible,” Marinho added.

He charged the current management to remain focused and always go for the best for the corporation, despite the complexities of the oil and gas industry.”

In his response, Baru thanked Marinho for his visit and sharing his thoughts on how best to improve the corporation’s operations.

“I am particularly happy with your advice on remaining competitive. I wish to assure you that whatever companies we are floating in our quest to transform the corporation, we would ensure that we compete favourably in such area,” Baru noted.

He prayed God to continue to keep Chief Marinho safe and healthy, even as he assured him that NNPC’s doors would always remain open for stakeholders to contribute their quota towards the corporation’s progress.

Chief Festus Remi Ayodele Marinho, an octogenarian, was the first Managing Director of the then Nigerian National Oil Corporation (NNOC), the forerunner of NNPC.

He was twice the managing director of the corporation, serving from 1977-1979 and from 1984-1985, both periods when the incumbent President, Muhammadu Buhari, was Petroleum Commissioner and the Head of State respectively.