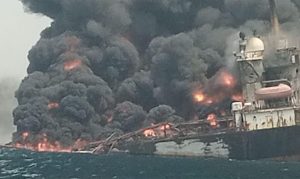 Lagos — Not less than three persons have been reported dead in the explosion that rocked the Floating Production Storage and Offloading, FPSO, vessel belonging to Shebah Exploration & Production Company Ltd, SEPCOL.
SweetcrudeReports had earlier reported that the offshore facility, Trinity Spirit, located at the Ukpokiti terminal located in the Niger Delta, went up in flames in the early hours of Wednesday.
This Newspaper has now learnt that three persons died following the explosion.
A ten-man team was said to be onboard during the incident.
Sources told this news platform that the bodies of the dead have been recovered while three injured persons were rescued.
The facility exploded as a result of “failing safety critical equipment”, the source said.
Ikemefuna Okafor, Chief Executive Officer of the company, confirmed the incident in a statement to SweetcrudeReports.
According to him, the firm’s management are “working with necessary parties to contain the situation”. He added that the company is “prioritising investigations with respect to their safety and security”.
“We appreciate the assistance provided us by the Clean Nigeria Associates, the Chevron team operating in the nearby Escravos facility and our community stakeholders as well as fishermen, who have been of tremendous assistance since the incident happened”.
“We have duly notified all relevant authorities and we appeal to the members of the public to stay away from the area while our Crisis Management Team continue to monitor the situation and update all stakeholders with new information as the investigation evolves”, he said.