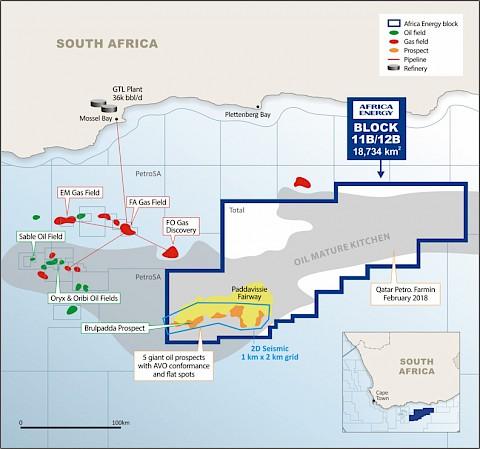 *Total has made a gas condensate discovery on the Brulpadda prospects.

CAPE TOWN, South Africa — One of the most important discoveries of the year took place 175km off the southern coast of South Africa where Total has made a gas condensate discovery on the Brulpadda prospects, located on Block 11B/12B in the Outeniqua Basin. The exploration well encountered 57 metres of net gas condensate play in Lower Cretaceous reservoirs. Following the success of the main objective, the well was deepened to a final depth of 3,633 metres and has also been successful in the Brulpadda-deep prospect.

Speaking at Africa Oil Week last week (Africa-OilWeek.com), Dr Enzo Insalaco, Vice President Exploration Africa at Total explained that South Africa has become an interesting area for exploration. “When you look at the fundamentals, you can see a scenario where there are a number of significant, relatively underexplored basins and many of the play fundamentals are present in these places,” he said. “We see that there’s a lot of scope for exploration and significant potential.”

That interest has been illustrated by the recent activity by the industry, which has seen a significant amount of seismic capture and blocks being taken in Namibia and South Africa. “Much of that activity is early-stage, so 2D or 3D,” Insalaco added. “What we will see in the next few years is an uptick in reservoir drilling and exploration. We have a strong position in the oil basin, so we have a couple of blocks in the Orange Basin and in South Africa the 11B/12B block where this discovery was made.”

Opening a new petroleum basin
For Total, Brulpadda was certainly a high impact well for opening up what they believe is a significant petroleum basin. “It was a very bold technical well,” Insalaco continued. “Many people may not realise that the well was actually drilled on 2D. It is a deep offshore well, so drilling on 2D was a very bold move. But given our understanding of the basin and the innovations we did on the operations, this well could be drilled safely and successfully on 2D.”

“As we know, it was an operational success just as much as a technical success; we drilled the well within budget, within time and in terms of NPT we have about 3% of NPT and 3% waiting on weather. If you consider the conditions, that is fantastic operational performance. We drilled the well to the main reservoir log and then we went down to a deeper reservoir.”

“We did extensive logging records, took samples of fluid, reservoir and source rock. It was a fantastic result in terms of operational performance and data acquisition. It is a gas and condensate and oil discovery, both traces were found. The reservoirs were well-developed with good fluid and reservoir properties. You could not really wish for more information from an exploration well. That data acquisition has really put us in a great position going forward to be able to accelerate the next level and the evaluation.”

A fast track to production
The fact that Total drilled the prospect on basic 2D seismic data meant that they needed to hit the ground running in the discovery scenario. They planned for success and were ready to shoot the 3D campaign as soon as they were comfortable that the well was successful and there was going to be potential on the basin. “We were ready for 3D, we were already negotiating contracts on the way,” Insalaco added. “When you look at the at the milestones on the well you can see that we finished our P&A in the first week of February. The rig moved offsite the middle of February, and the first 3D seismic shot was done on the 14th of March. A month between the first shot of seismic and the end of the work which is a fantastic performance.

“We also fast tracked the seismic acquisition, so we could start looking at the potential on the new data by June of this year and that allows us, together with the information that we collected, to fast-track well evaluation and put us into position to commission the rig and be able to drill early next year. Doing as many processes in parallel allowed us to save 18 months to two years in the well programme and I don’t think we can compress that timeline anymore, given the operational constraints and the operational windows for the seismic acquisition.”

With the initial phase of the 3D seismic acquisition programme over the basin completed, the Brulpadda well results will be integrated with the 3D seismic data ahead of the drilling programme in 2020, which will include up to three exploration wells.