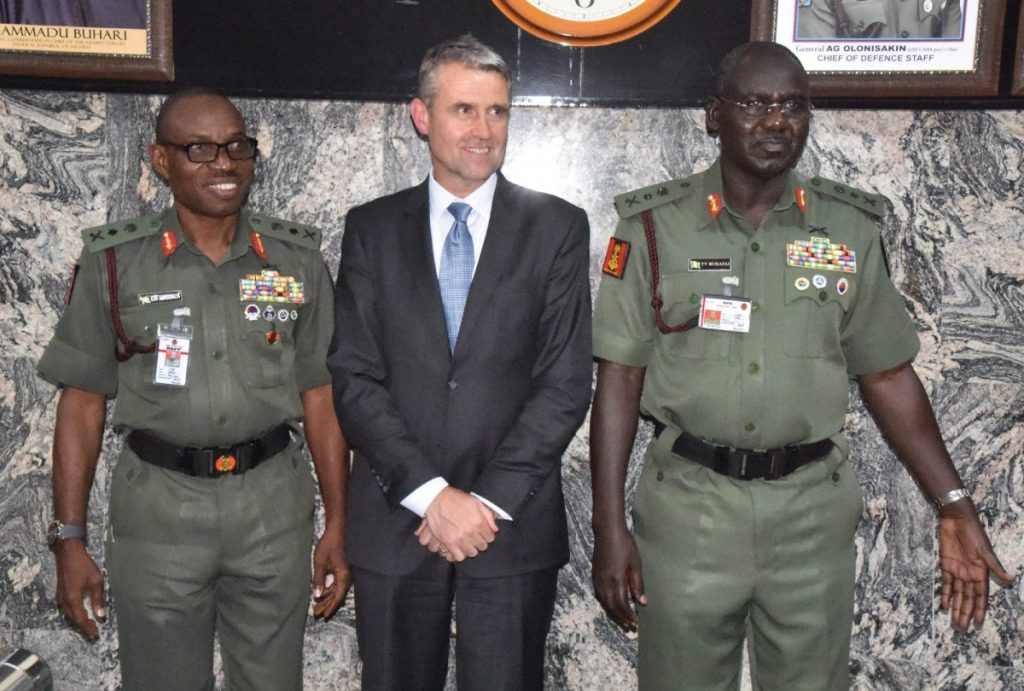 Abuja — Total Exploration & Production Nigeria Limited earlier today commended the Nigerian Army for maintaining peace and security in all its areas of operations, especially in its onshore production areas.

Speaking in Abuja, during a visit to the Chief of Army Staff, Lieutenant-General Tukur Buratai, Managing Director/Chief Executive of Total, Mr. Mike Sangster also commended the military for its role in combating insurgency in Nigeria.

He explained that Total embraces and was guided by the Voluntary Principles on Security and Human Rights, while he extended the company’s goodwill message to the soldiers who daily risk their lives for the security of Nigerians and the country’s territorial integrity.

“We appreciate the support and cooperation of the Nigerian Army to Total’s business operations. Our hearts are with the families of the soldiers who have paid the supreme price in the line of duty,” he added.

Sangster pledged to sustain the cordial relationship between Total and the Nigerian Army, while he solicited the support of the military in addressing issues of crude oil theft, kidnapping and pipeline vandalism.

He said, “Our locations are still not spared of the general security risks — kidnapping, robberies at service stations, among others. Locations have their peculiar security risks such as vandalism, asset theft among others, so we rely on government security forces to maintain an environment conducive to operations.”

Sangster disclosed that Total is presently the only international oil company operating across the entire energy value chain in Nigeria, and is still operating in the onshore, offshore and deepwater segment of the upstream petroleum industry.

He noted that despite security challenges in the downstream sector, Total still maintains 576 service stations across the country.

Also speaking, the Army Chief, Tukur Buratai, said the Nigerian Army had enjoyed longstanding relationship with Total, disclosing that Total’s interventions through its Corporate Social Responsibility, CSR, initiatives, had boosted the morale of the troops and has helped improved the living standards of the troops.

Specifically, Buratai commended Total for the construction of an ultra-modern clinic at the Nigeria Army University, Biu, while he urged the company to consider other areas of intervention in the institution.

“Total’s decision to undertake this project at this time is highly commendable, especially at this period when there are many other needs competing for scarce resources,” Buratai noted.

He disclosed that the Nigerian Army would continue to support Total in all area of its operations, both in the upstream, midstream and downstream sectors, especially due to the fact that the operations of the company is key to the economy of Nigeria.

The Chief of Army Staff further called on the company to extend its crude oil exploration activities beyond the Niger Delta, especially to the far north, assuring the company that the Nigerian Army would be available to provide support and protection for the company in this area.

He advised oil companies to step up their community engagement activities to promote peace in their area of operations, and desist from using only one community contractor, as this fuels crisis within the communities.