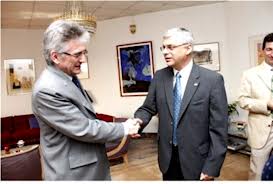 22 December 2012, Sweetcrude, Abuja, Nigeria – A joint scholarship scheme (“TQJS”) titled TEPNG/ Quai d’Orsay, has been established between Total and the Embassy of France in Nigeria. Under the new programme, five Nigerians are to benefit from an annual scholarship sponsored by Total in collaboration with the French Embassy in Nigeria with effect from the 2012/2013 academic year.

The agreement to formalize the programme was signed at the French Embassy, Abuja on Wednesday, December 19, 2012, between Total Exploration and Production Nigeria Limited (TEPNG) and the Embassy. The Managing Director/Chief Executive of TEPNG, Mr Guy Maurice signed for Total while H.E. the Ambassador of France, Jacques Champagne de Labriolle signed for the Embassy of France in Nigeria.

The programme started with a pilot scheme this year when a candidate was jointly selected and sponsored to study International Law in France.

The agreement makes provision for a four-man steering committee to manage the scheme on behalf of the parties.

The cost of each of the international scholarship is about 54,000Euros.
Benefits to be enjoyed by the selected beneficiaries amongst others include a sum to cover:
 Travel Expenses
 Academic fees if in a private university or institution in France
 Living expenses for a period of ten (10) months (including food, housing costs and academic text or materials)
 Logistics support in obtaining necessary permits or visas for the selected students.
 Health insurance for each Beneficiary (« bourse de couverture sociale ») such as will give the Beneficiaries the “status” of French government scholarship’s beneficiaries and the health care benefits associated with this status.
 60 hours minimum language training in Nigeria for the selected students.
 School fees for Beneficiaries selected into public universities in France.

“Understanding changes in your environment is not a matter of specialization but a matter of personal balance and culture”, said Ambassador Champagne de Labriolle as he explained that the programme was borne out the need to contribute to the training of Nigerians in different fields. He thanked Total for its contributions to the development of the Nigerian society.

Also speaking, Mr Guy Maurice noted that such initiatives on the part of the company was a reflection of its confidence in the country and continuation of what it did in the past.

The Ambassador’s team included the Counsellor for Co-operation and Culture, Mr. Patrick Perez.

TOTAL has been collaborating with top rated institutions around the world as part of its contribution towards human capacity development in its host communities. It is the main sponsor of the Institute of Petroleum Studies (IPS), a post graduate institution at the University of Port Harcourt run in collaboration with the prestigious Institute France du Petrole (IFP) France.