TotalEnergies says it will stick to Russian gas contracts

Paris — TotalEnergies (TTEF.PA) will stick to existing natural gas contracts in Russia as long as gas is not specifically targeted by European sanctions, the company’s chief executive said on Wednesday, reiterating a previously stated position. 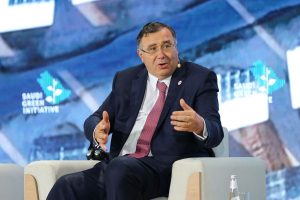 *Chairman of the Board & CEO of TotalEnergies, Patrick Pouyanne speaks during the Saudi Green Initiative Forum in Riyadh, Saudi Arabia, October 23, 2021. REUTERS/Ahmed Yosri

“We are entering into something which is more and more complex”, Patrick Pouyanne told investors, speaking about the war in Ukraine, adding that he believed the conflict could last for some time.

Asked about dividends resulting from Total’s close-to to 20% stake in Russian gas producer Novatek, Pouyanne said “we have received something this year” but added that receiving payments from Russian companies was becoming increasingly complex.

Besides its Novatek holding, TotalEnergies also owns minority stakes in the Yamal and Arctic LNG projects.