TotalEnergies stands with Egi as Eze Egi passes on

on: December 19, 2021In: Community Development, featured 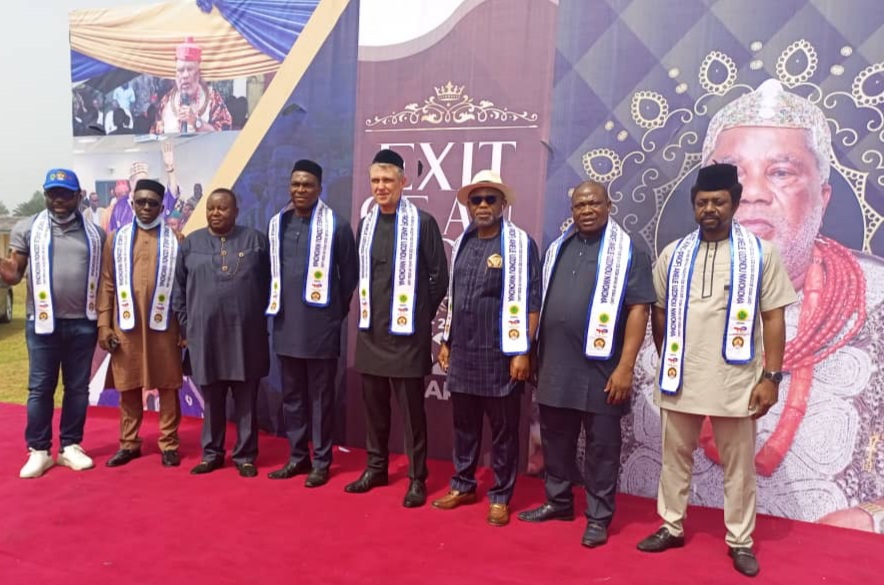 *Delegation of TotalEnergies led by the Managing Director, Mr Mike Sangster, at the burial ceremony of Eze Egi in Erema, on Friday

Sangster speaking at the burial ceremony of the late Monarch in Erema, Ogba/Egbema/Ndoni LGA of Rivers State, assured that the company will continue to stand with Egi and the people of Egi Kingdom.

He said the company received with grief, the news of the demise of the monarch, while describing him as a King who made invaluable contributions to the development and peace of the Egi Kingdom.

“As one of the most revered traditional monarchs in Ogbaland, the late Eze Egi lll made invaluable contributions to the development and peace of the Egi Kingdom, Ogbaland, Ogba/Egbema/Ndoni LGA, Rivers State, and the country in general.

“He was a beacon of hope for many, a passionate advocate of peaceful co-existence as well as a formidable voice for responsible and purposeful management of natural resources.

“The late king and professor was a visionary leader who promoted mutual respect and positive engagement as wel as cordial relationship amongst various stakeholders and development partners.

“A rare combination of academic excellence, traditional wisdom, and pragmatic leadership, the late Eze Egi brought glamour and
intellectual prowess to the throne. His reign elevated the culture of Egi Kingdom far beyond the shores of his kingdom.

“We shall miss his royal wisdom and the objective counsels which he graciously availed us and other stakeholders.

“As usual, the company wll stand with Egi people during these trying times. The Nwokoma family, the Egi traditional council, the Egi People’s Assembly, and indeed the entire people of Egi Kingdom, please
accept the profound condolences of the management and staff of the TotalEnergies Upstream Companies in Nigeria for this
irreparable loss of His Royal Majesty, Eze Egi lll.”

Similarly, the Rivers State Governor, Nyesom Ezenwo Wike, also eulogized the late Monarch describing him as a scholarly monarch whose intellectual foundation engendered peace and progress in his domain.

Wike represented by the Commissioner for Chieftaincy and Community Affairs, Mr. Sam Ejekwu, commiserated with the late Monarch’s widow and the people of Egi clan, while praying to God to give the family the fortitude to bear the irreparable loss.