TotalEnergies targets 30 percent of women in executive positions by 2025

on: November 25, 2021In: Oil
…Raises awareness on gender based violence 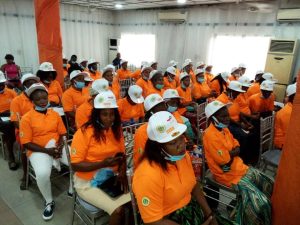 Port Harcourt — As the world marks the International Day for the Elimination of Violence against Women, TotalEnergies EP Nigeria Limited has announced that it intends to have 30 percent of women in executive and senior management positions by 2025.
The company called for increased policy making and resources towards ending violence against women and girls around the world, noting that eliminating violence against women was not about demanding exceptional treatment, but about letting women live in dignity.
Executive Director, JV Asset, Mr Obi Imemba, at the ceremony organised by the company to mark the the 2021 International Day for the Elimination of Violence against Women, held in Port Harcourt, said TotalEnergies has a policy promoting gender equality and against office harassment.
Imemba, represented by the Acting Manager, Community Relations, Offshore and PHC, Mr Chuka Elenwa, listed physical, sexual and psychological violence against women to include battering, marital rape, forced sexual acts, child sexual abuse, forced marriage, street harassment, stalking, cyber- harassment, human trafficking, female genital mutilation and child marriage.
“TotalEnergies today has clear policy in the direction of promoting gender equality and against office harassment. As part of the group’s drive to gender equality it has set an objective of having 30% of women in executive and senior management position by the year 2025.
“As we mark this event today, we need to affirm a culture of zero tolerance for violence against women. No tradition, custom or practice can be invoked to justify any form of violence against women. We are all responsible for shaping our culture in a way that is respectful of women’s rights. We must work together to put an end to violence against women,” he said.
Imemba also said for violence to be eliminated against women, all hands must be on deck to achieve the goal, in line with the Sustainable Development Goal 5 (Gender Equality) of the United Nations.
He stressed: “The sole aim is to raise public awareness around the issue as well as increase both policymaking and resources dedicated to ending violence against women and girls worldwide.
“Violence against women and girls is one of the most widespread, persistent and devastating human rights violations in our world today and remains largely unreported due to the impunity, silence, stigma and shame surrounding it.
“Achievement of the United Nations Sustainable Development Goal 5 (Gender Equality) and women empowerment will not be possible if we continue to allow violence against women to persist. This issue Concerns us all, involves us all and requires concerted and urgent effort and action.
“Women and girls are at risk of violence when carrying out essential daily activitieeswithin their homes, or while walking, taking public transport, collecting water or firewood.
“Violence against women and girls occurs in all countries, contexts and settings and is one of the most pervasive violations of human rights. Eliminating violence against women is not about demanding exceptional treatment. It is simply about letting women live in dignity.”
A resource person at the event, Barr. Ngozi Odukwe, charged women and girls to always speak up and speak out against gender based violence,  without the fear of what the society will think of them.