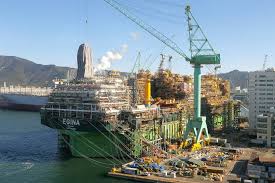 The 200, 000 barrels per day capacity production vessel which arrived in January from South Korea, ought to have left LADOL’s yard since June however, according to our sources, was delayed due to some unfinished technical work, and the recent controversy surrounding the one percent extra fee which investors said was imposed outside the agreed fees.

When the vessel finally leaves, it will head straight to the Egina oil field located 150km off the coast of Nigeria.

The field is being developed by Total Upstream Nigeria (24%) in partnership with CNOOC (45%), Sapetro (15%) and Petrobras (16%). Egina is the third deep offshore development of Total in Nigeria.

Although production is already behind schedule, however, once the vessel sails to its destination, it will begin hook-up in preparation for its first oil in first quarter 2019, according to our sources.

“Egina is already late by two months. So would  have left if not for the Sallah holiday but then, it would leave either late this week or early next week,” one of our sources said.

The five wells on Egina field encountered between 60m and 80m of oil in Miocene sands. The oil reserves are estimated at 550 million barrels. The light oil is rated at 28° API.