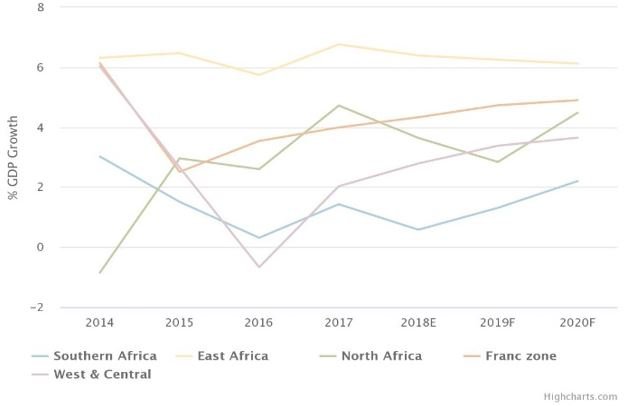 NAIROBI, Kenya —*Most African countries are bearing the brunt of the US-China trade war, as well as a slump in commodity prices which is greatly affecting exporters, the latest report from the Institute of Chartered Accountants in England and Wales, ICAEW, has revealed.

The ICAEW Report titled – Economic Update: Africa Q3 2019. provides GDP growth forecasts for various regions including East Africa which is set to grow by 6.3%, West and Central Africa at 3.4%, Franc Zone at 4.7%, and Southern Africa at 1.3%

The report, commissioned by ICAEW and produced by partner and forecaster Oxford Economics, predicts that Africa’s growth rate is set for a sluggish pace after a disruption in oil production in North Africa and with low international oil prices in Francophone Africa. The situation will be further fueled by policy uncertainty, concerns over debt-landed parastatals and high unemployment in South Africa.

Speaking during the launch of the latest report, Michael Armstrong, ICAEW’s Regional Director for Middle East, Asia and Africa, said that the growth of some regions in Africa is being held back by the fluctuating price of oil. “The growth forecast for the Franc Zone this year is 4.7%, due to a structurally low international oil price environment, which continues to weigh on growth in the region’s oil exporters,” said Mr. Armstrong.

“While still expected to remain the strongest growing region on the continent, East Africa is projected to record a slightly lower real GDP growth rate of 6.3% this year compared to 2018.The fact that the countries in the region are not as reliant on commodities as sources of income shields them from global shocks”, he added.

Also Read: Nigeria’s DPR gets N5bn from FAAC in August

Delving deeper into the East African outlook, Uganda has a favourable economic outlook on the development of its hydrocarbons sector and GDP growth is forecast above 6% p.a. over the medium term. However, extended delays in oil exploration and the widening twin deficits (due to an increase in public debt and increasing capital goods imports to support the nascent hydrocarbons sector) pose significant downside risks. Uganda, in partnership with Tanzania, plans to build the East African Crude Oil Pipeline which is worth $3.5bn.

In North Africa, the GDP growth rate is forecast to slow to 2.8% due to fluctuations in oil production in Libya which compounded the effect of weak Eurozone demand on the region’s other economies.

Regional GDP growth for Central and West Africa is forecast at 3.4% in 2019. This incorporates the impact of the Nigerian economy’s slow start to the year, as pipeline damage curtailed its oil production.

Southern Africa is forecast to keep struggling, with a growth rate of 1.3% in 2019. The region’s economic anchor, South Africa, is expected to show nearly-flat growth because of policy uncertainty, concerns over debt-laden parastatals and high unemployment. In the region’s other countries growth has been slowed by supply-side challenges, notably adverse weather conditions in the wake of two cyclones, a regional rainfall deficit and power rationing.