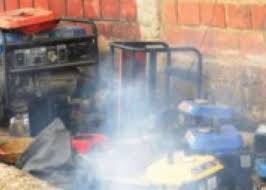 Port Harcourt — A couple with their five children have been found dead in Big Elele, Ikwerre Local Government Area of Rivers State, following a prolonged inhalation of generator fumes.

Our correspondent gathered that the family of seven were found dead in their one-bedroom flat apartment in Too-Much-Money Estate, inside Big Elele, yesterday by neighbours, while a generator was running inside the house.

An eye witness, Ugochukwu Onuwor, said it was insecurity in the area that compelled the family to put their running generator inside the house, so as not to be stolen by hoodlums.

Onuwor said most people living in the area put their generators inside the house, adding that this was not the first time such death was happening in the area.

He also added that the remains of the couple and their five children have been taken to their country home in Ihiagwa, Owerri West Local Government Area of Imo State, for burial.

“The family actually put on their generator inside the kitchen. The kitchen window is very small, and it’s just some meters away from the ground and not too open so as to allow adequate ventilation

Confirming the development, the Rivers State Police Command says the investigation has been launched into the matter to unravel the cause of the death of the seven family members.

Omoni said their remains have been deposited in a mortuary, for autopsy, so as to pave the way for further investigation.