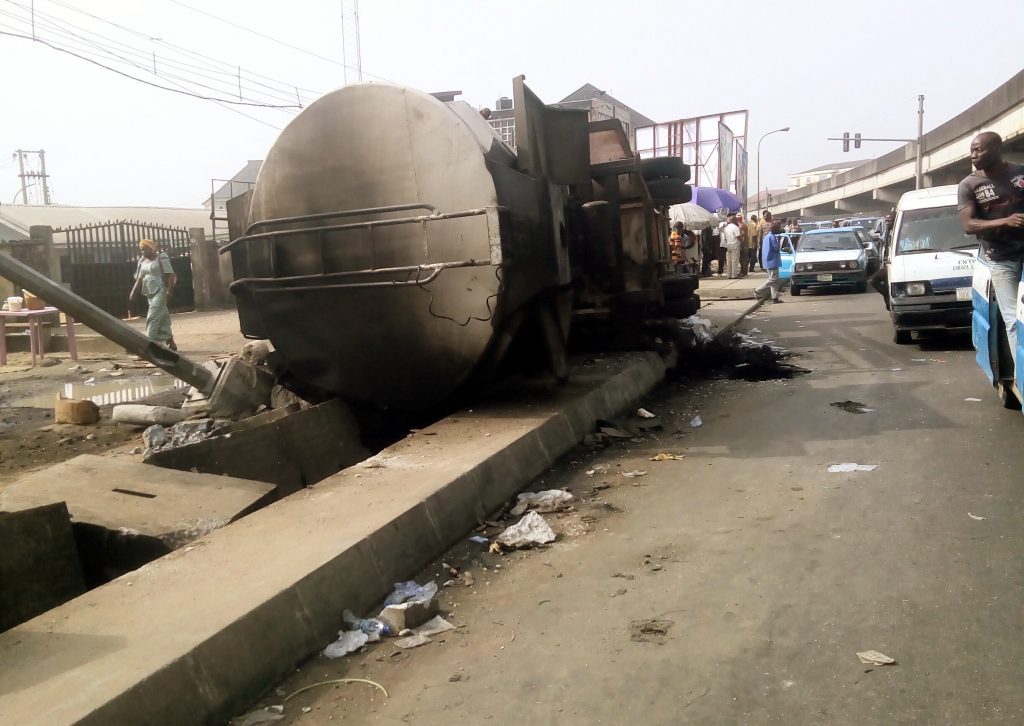 *The petrol tanker which spilled its content resulting in the fire.

25 December 2018, Sweetcrude, Port Harcourt — It was a tragic Christmas day in Port Harcourt yesterday as a petrol tanker fire explosion razed a section of Mummy-B Road, off GRA Junction by Aba Road, killing three family members from their sleep and injuring scores.

Apart from those injured, the inferno also razed down properties worth millions including houses, shops, and cars.

Our correspondent gathered that the fire which started around 1 am on Tuesday morning, was caused by a petrol tanker which crashed into a drainage around Rumuola axis, during the wee hours of Monday night and emptied its content into another drainage connecting Mummy-B Road behind Mopol-19 barracks.

An eyewitness who spoke to our correspondent anonymously, said products flowing through the drainage like flood water, led to the inferno.

According to him, “The tanker that was carrying petrol, fell around 11 pm on Monday night and emptied its content into the gutter but the fire started around 3 am on Tuesday morning.

“By the time the fire started, the tanker was already empty, so there was no much fire and impact around here except for the drainages that were damaged.

“The driver escaped with the head of the tanker but we heard he has been apprehended.”

It was also gathered that the deceased family were asleep in their house close to the drainage which the fire came out from due to the spilled petrol.

Three members of the same family, two children, and their mother were burnt beyond recognition while two others were rescued alive by neighbours.

A neighbour, identified as Pastor Sunday Etienam said that he helped to save the two surviving siblings out of the family of five but the two other siblings and their mother died in the inferno.

Etienam said he lost everything in the fire after he managed to escape with his children into a nearby bush.

According to him, “My house was also burnt here, I helped to save Joseph and Miracle from the house after I heard them crying, otherwise, it would have been five casualties today.

“Their house was affected first because they were closer to the drainage before it got to my house and others, it is shocking to us,” Etienam said.

Meanwhile, the Rivers State Government has said that the petrol tanker which caused the Christmas Day fire accident in Port Harcourt was loaded with suspected illegally refined petroleum products.

Rivers State Commissioner for Energy Resources, Mr. Shedrack Chukwu, said all efforts to stop illegal bunkering in the state was not yielding the desired result as there is an alleged collaboration with security agencies.