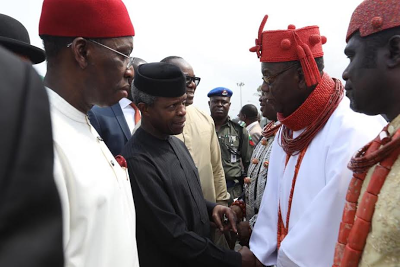 04 October 2018, Sweetcrude, Port Harcourt — The Federal Government and the National Assembly have been urged to expedite actions towards the passage of the Host Community Fund segment of the Petroleum Industry Bill, PIB, in order to ameliorate the suffering of petroleum host communities in the country.

The Traditional Rulers Association of Oil Mineral Producing Communities of Nigeria, TROMPCON noted the call noted that while the issue of gas flaring has become history in other oil producing countries of the world, oil producing communities in Nigeria continue to suffer for it.

King Amaechi who was giving his assessment of 58 years of Nigeria as an independent state, stressed the need for equity and fairness to be properly entrenched in the country’s structure.

According to him, “It is disappointing that while crude oil remains the economic live wire of Nigeria, communities, where the crude comes from, are not fairly treated; this contradicts civilized standard.

“What could have been the real economic situation of the country without crude oil? Equity and fairness demand that these communities be appreciated and also given their due share as to give them a sense of belonging,” the Monarch emphasized.

The Monarch regretted that while the petroleum host communities produced over 85percent of the nation’s revenue and for almost six decades, laws that should protect the communities were yet to be properly entrenched in the nation’s constitution.

“The irony is that the fines paid by oil multinationals for gas flaring go to the Federal Government in Abuja, instead of the oil producing communities which directly suffer, dwellers get sick and die as a result of the negative effects of gas flares.

“Oil spills over the years have devastated the environment of these oil producing communities whose traditional occupation is fishing and farming.”