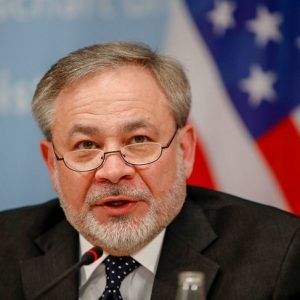 Washington — U.S. President Donald Trump said on Tuesday he has asked his cabinet to devise a plan to inject cash into the ailing U.S. oil-drilling industry to help it survive a historic collapse in crude prices.

“We will never let the great U.S. Oil & Gas Industry down. I have instructed the Secretary of Energy and Secretary of the Treasury to formulate a plan which will make funds available so that these very important companies and jobs will be secured long into the future!” Trump said on Twitter.

U.S. oil and gas companies from Texas to Wyoming have struggled to stave off bankruptcy amid worldwide stay-at-home orders and business stoppages spurred by the coronavirus outbreak that have obliterated global demand for fuel.

U.S. crude oil futures collapsed to trade in negative territory for the first time in history on Monday, as desperate traders paid to get rid of barrels amid a dearth of storage space.

He added he and Mnuchin also planned to work with U.S. regulators banks in hopes of ensuring continued access to credit for the U.S. oil and gas industry, which is estimated to owe more than $200 billion to lenders through loans backed by oil and gas reserves.

As revenue has plummeted and assets have declined in value, some companies are saying they may be unable to repay.

Oil prices have crashed as demand has shrunk due to lockdowns and economic slowdowns during the coronavirus pandemic. The Organization of the Petroleum Exporting Countries and its allies, including Russia, recently announced sweeping cuts in production, amounting to almost 10% of global supplies. Demand has dropped as much as 30%.

Trump has separately announce plans to fill up the U.S. Strategic Petroleum Reserve, something that would take around 77 million barrels off the market – or less than a day of typical global demand.

Congress so far has declined to provide the funding due to opposition from Democrats who oppose aiding the oil industry when laid-off workers and other sectors also need help.

Brouillette said on Tuesday he would meet with lawmakers in the U.S. House of Representatives to renew the administration call for funds to buy oil.

In the meantime, the Department of Energy is in talks with oil companies to lease some of the available space.

Trump has also repeatedly threatened to use tariffs to block crude oil imports to help domestic drillers – but the U.S. energy industry’s main trade associations have opposed the move, saying it would only raise costs for the refining sector.