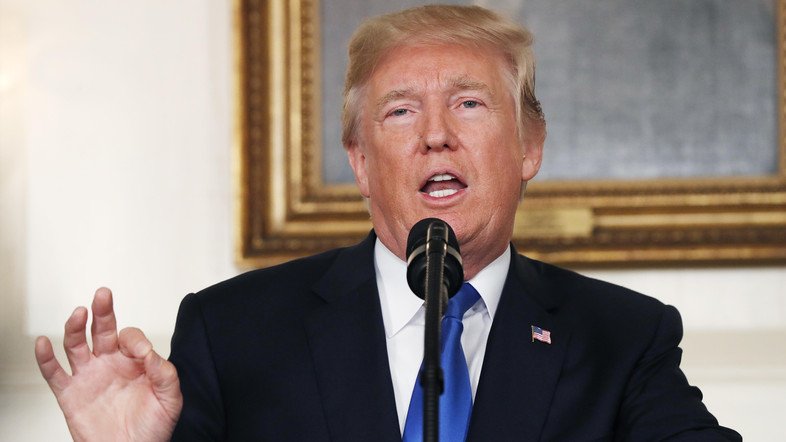 *U.S. President Donald Trump speaks about Iran and the Iran nuclear deal in the Diplomatic Room of the White House in Washington, U.S., REUTERS/Kevin Lamarque

WASHINGTON — President Donald Trump ramped up threats to use tariffs to protect the U.S. energy industry from a historic glut of oil, as efforts to forge a global deal to cut output appeared to lose momentum.

Trump said Saturday at a White House press briefing he’d use tariffs if needed to protect the domestic oil industry, even as he predicted that Saudi Arabia and Russia would come to an agreement to cut output and stem the rout in prices.

But such a deal looked a bit further from reach at the weekend after a diplomatic row between Saudi Arabia and Russia. A gathering of OPEC+ members and other producers scheduled for Monday was pushed back, to give more time for negotiations.

Saudi Arabia, which launched a price war last month with Russia after OPEC+ talks broke down, has made clear that it won’t cut production unless other producers — including the U.S. — also hold back supply. But Trump said on Saturday: “I don’t care about OPEC,” a “cartel” he’s opposed all his life.

The prospect of a deal to reduce the massive glut of oil caused by the coronavirus lockdown sent benchmark oil futures to a record gain last week. Oil prices have fallen about 50% this year as the pandemic has knocked out as much as a third of global oil demand. That means producers are going to have to reduce output eventually — with or without a deal — as storage both on land and at sea fills up.

In the latest maneuver in the price war, Saudi Arabia postponed on Sunday its monthly price-setting event for exported oil. Saudi Aramco’s official selling prices for May could be pushed to Tuesday or Thursday, according to a person familiar with the situation. The OPEC meeting has been tentatively rescheduled for Thursday.

The move allows the company to have a better idea of how negotiations are going before setting the prices that are its key weapon in its war with Russia for market share. Last month, it also postponed the event in the midst of wrangling at OPEC+ and responded to the breakdown in those talks with a historic price cut.

On the idea of slapping tariffs on foreign oil, the U.S. oil industry is split. Some independent shale producers — who’ve been hardest hit by the recent market slump — are in support, while refiners and large integrated companies are typically opposed.

The American Petroleum Institute, which helped arrange a meeting with the president on Friday, argues tariffs would inject uncertainty into an already rattled global marketplace.

“If I have to do tariffs on oil coming from outside, or if I have to do something to protect thousands and tens of thousands of energy workers, and our great companies that produce all these jobs, I’ll do whatever I have to do,” Trump said Saturday. Low oil prices are “going to hurt a lot of jobs,” he said.

That was a change in tone from Friday, when he suggested he wasn’t inclined to target Russia or Saudi Arabia with oil tariffs.
Hundreds of thousands of U.S. oil industry jobs are hanging in the balance, with about $15 billion of investments wiped out from the budgets of shale explorers and many of them on the brink of bankruptcy.