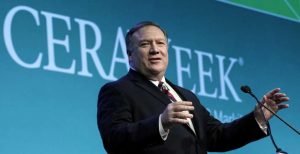 “The United States, in cooperation with our allies and partners, is closely monitoring efforts by the Iranian regime to evade U.S. sanctions,” said the official, speaking on condition of anonymity. Washington “reserves the right to designate any person engaging in or facilitating these activities in accordance with our laws.”

The official was responding to a request for comment on a Reuters report this week that at least two tankers have sent Iranian fuel oil to Asia in recent months despite U.S. sanctions against such shipments.