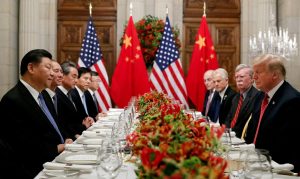 *US President Donald Trump and China’s Xi Jinping agreed Saturday to suspend any new tariffs in the escalating trade war between the world’s two largest economies.

News Wires — Negotiators from the U.S. and China have agreed to meet again in Beijing in the future for further trade talks, the editor-in-chief of China’s Global Times newspaper said on Friday.

“I learned from authoritative source (sic) that China-US trade talks didn’t break down. Both sides think that the talks are constructive and will continue consultations. The two sides agree to meet again in Beijing in the future”, Hu Xijin said in a tweet.