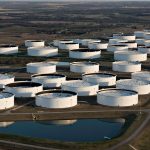 *Cushing, Okla., is a major oil storage site. Amid record oil production, some analysts worry the U.S. will run out of places to put it al

Crude inventories fell 282,000 barrels in the week to May 24, compared with analysts’ expectations for an decrease of 857,000 barrels and the industry group the American Petroleum Institute report of a 5.3 million-barrel draw.

Stocks edged down from the previous levels which were the highest since July 2017. However, at 476.5 million barrels, they were about 5% above the five year average for this time of year.

“This increase in refinery utilization has resulted in another significant increase in gasoline inventories, which is pressuring gasoline prices,” said Andrew Lipow, president of Lipow Oil Associates in Houston.

Gasoline stocks rose by 2.2 million barrels, compared with analysts’ expectations in a Reuters poll for a 528,000-barrel drop, and were about 1% above the five year average for this time of year, the EIA said.

Also Read: Total to move ahead with using palm oil at biodiesel refinery

U.S. Gulf Coast gasoline inventories climbed to the highest levels for May on record, according to the data.

The Memorial Day holiday weekend is considered the start of the summer driving season and the peak demand season for gasoline.

Distillate stockpiles, which include diesel and heating oil, fell by 1.6 million barrels, versus expectations for a 564,000-barrel increase, the EIA data showed.