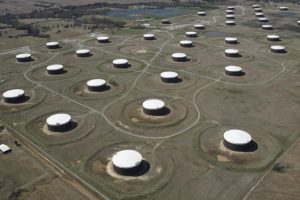 *Crude oil storage tanks are seen from above at the Cushing oil hub, in Cushing, Oklahoma, March 24, 2016. REUTERS/Nick Oxford/File Photo

“The report was supportive due to the large drop in crude oil inventories, which occurred due to high demand from refiners,” said John Kilduff, a partner at Again Capital Management in New York. A significant drop in crude oil imports after a spike higher last week also supported prices, he said.