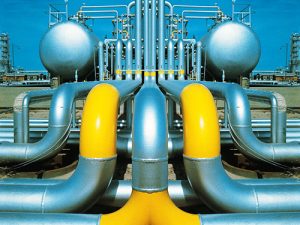 News Wires — Next-day natural gas prices at the Waha hub in the Permian basin in West Texas fell below zero for the first time since early April.

Waha averaged minus 40 cents per million British thermal units (mmBtu) for Wednesday. The last time Waha traded below zero was April 3 when it averaged a record low minus $4.28, according to data from Refinitiv.

On the Intercontinental Exchange, meanwhile, Waha has been trading below zero all week.

That oil comes out of the ground with associated gas, making the Permian the nation’s second biggest shale gas basin.

The problem is construction of new oil and gas pipelines in the Permian has not kept up with output, which has more than doubled over the past three years as the United States has risen to become the world’s largest oil producer.

So producers are forced to burn or flare the gas, pay others with space on existing pipelines to take it or stop drilling.

They do not want to stop drilling for oil, especially with crude futures up almost 40 percent this year.

So they burn the gas for as long as they can – Texas rules allow firms to flare gas for up to six months – and pay other to take it when prices turn negative as they wait for new pipelines.

Permian drillers flared a record 0.4 billion cubic feet per day (bcfd) in the third quarter of 2018 and are expected to flare at least 0.6 bcfd by mid-2019, according to Oslo-based energy data provider Rystad Energy.

One billion cubic feet is enough gas for about 5 million U.S. homes for a day.

Energy companies are building new pipelines, but those will not enter service until late 2019 and will likely fill up quickly, according to analysts.

Kinder Morgan Inc is working on two gas pipes – the $1.75 billion Gulf Coast Express and the $2 billion Permian Highway – that will each transport about 2 bcfd from the Permian to the Gulf Coast.

Gulf Coast Express is expected to enter service in the fourth quarter of 2019 and Permian Highway in the second half of 2020.