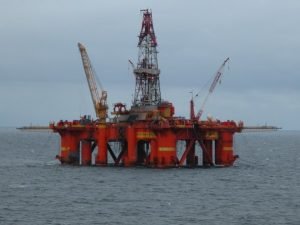 News wire — U.S. energy firms cut the number of oil and natural gas rigs operating for the first time in eight weeks, even though the rig count rose for 12 straight months, amid an industry stampede to reward investors with share buybacks instead of boosting production.

The U.S. oil and gas rig count, an early indicator of future output, fell by three to 488 in the week to July 30, according to data on Friday from energy services firm Baker Hughes Co.

For the month, the total count rose 18, putting it up for a 12th month in a row for the first time since July 2017, while the oil rig count increased by 13, gaining for 11 consecutive months.

U.S. crude futures were trading around $74 a barrel with demand growing faster than supply. Earlier this month, oil prices rose to $76.98, their highest intraday trade since November 2014.

Prices have jumped over 50% this year but in a departure from previous boom cycles, shale producers releasing results this week have hunkered down to their previously stated plans for spending and production to provide greater investor returns by way of buybacks or dividends.

Top U.S. oil producer Exxon Mobil said its 2021 capital spending is expected to be at the lower end of its prior range but aims for more spending on key projects, including in the biggest U.S. shale basin in the Permian, in the second half of this year.

Chevron Corp said it cut its annual capital spending forecast to below last year’s. The second-largest U.S. producer said it expects output from the Permian to be almost same as last year’s, but will add drilling rigs in the second half of 2021.