Singapore/London/Houston — Chinese firms are set to become a major trading force in the global liquefied natural gas market in coming years, thanks to liberalisations at home and recently signed long term contracts for record amounts of LNG from U.S. suppliers.

China’s push into the international LNG market comes two decades after it made a similar big splash in oil trading and will put its firms in competition with established players like Shell (SHEL.L), TotalEnergies (TTEF.PA) and Vitol.

Fortunately, the pie is growing. By 2027, analysts forecast spot trade in LNG will be $20 billion, more than double its 2020 value.

Last year, China’s imports soared by 18% to a record 79 million tonnes, overtaking Japan as the world’s largest LNG buyer. China’s economic recovery from the COVID-19 pandemic was one factor, but the other was a pipeline reform that allowed more firms to become importers. 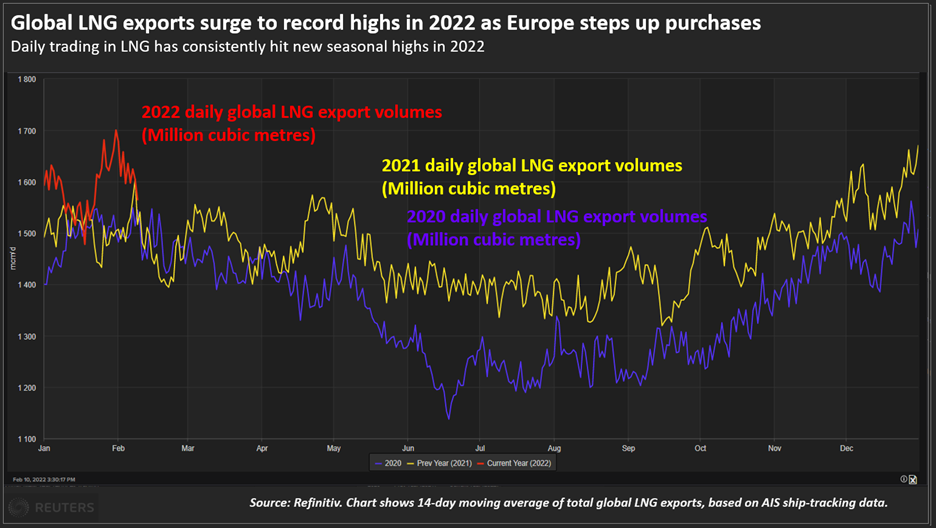 Felix Booth, Head of LNG at Vortexa, drew parallels with the way in which Japan’s largest LNG importer, JERA, evolved from “a large end-user to a powerful integrated portfolio player”
over the past decade.

“I foresee the Chinese national oil companies achieving a similar transition at an accelerated pace, enabled by a favourable market for long term supply of flexible cargoes and growth of Chinese natural gas demand,” Booth said.

The size of the contracts signed with U.S. suppliers should leave Chinese traders with ample amounts of LNG to trade on the global market, after meeting domestic demand, said one Beijing-based trader.

Late last year, Chinese firms signed up over 10 million tonnes a year of LNG with U.S. exporter Cheniere Energy (LNG.A) and Venture Global, with supplies extending through the mid-2040s’ and provisions for flexibility in marketing destinations for the bulk of the purchases. 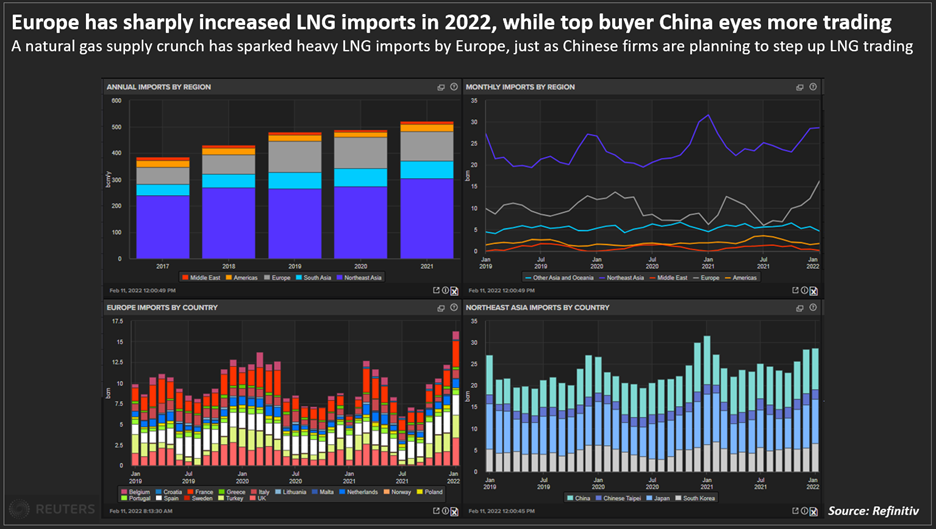 Unipec, a trading arm of Sinopec that already rivals Vitol as the world’s top oil trader, is beefing up its LNG desks outside China, having moved two Beijing-based staff to London and added a third trader to its Singapore team late last year.

“LNG now makes up less than a tenth in Unipec’s turnover, but it will be where the growth comes from in the future,” said a company executive, who declined to be named as he was not authorized to speak to media.

Signalling the impact of Unipec’s growing presence in the market, the firm’s largest-ever sell tender last month led in part to a 36% fall in Asian spot prices this year – though it has so far awarded a much smaller volume than the more than 40 LNG cargoes for 2022 delivery that it originally sought.

“By having multiple pipelines from Russia, Central Asia, along with their still growing domestic production, expanding LNG portfolio, and increasing storage capacity they (Chinese firms) will certainly have the ability to divert greater numbers of cargoes into the spot and short-term markets,” said Tamir Druz, managing director at Capra Energy.

ENN, China’s first private city-gas distributor operating a large receiving terminal for LNG, is another rising trader and has boosted its trading team, accordingly, having become the first Chinese company to sign a major supply deal with a U.S. firm since 2018. read more

Analysts, however, said that Chinese companies’ long-term success hinges on whether they can better manage price risks, build shipping capability and own a terminal asset in Europe.