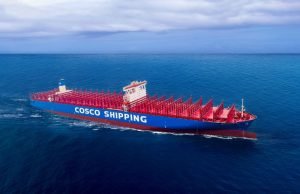 Washington — The U.S. Treasury on Friday said it has lifted sanctions on COSCO Shipping Tanker (Dalian) Co, one of the two Dalian units of Chinese shipping company COSCO which Washington had accused of transporting Iranian oil.

The administration of U.S. President Donald Trump blacklisted the two Dalian units of COSCO on Sept. 25 in a move that pushed global freight costs to record highs and disrupted shipping markets.