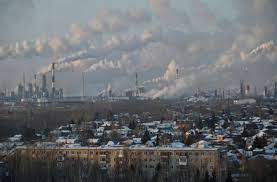 Washington — The Biden administration is weighing cutting U.S. imports of Russian oil and ways to minimize the impact on global supplies and consumers, the White House said on Friday, as lawmakers fast-track a bill that would ban Russian energy imports entirely.

“We are looking at ways to reduce the import of Russian oil while also making sure that we are maintaining the global supply needs out there,” White House spokeswoman Jen Psaki told reporters at a briefing. The White House remains in contact with U.S. lawmakers over the issue, she said.

U.S. Senators Joe Manchin, a West Virginia Democrat, and Lisa Murkowski, an Alaska Republican, on Thursday proposed bipartisan legislation to ban Russian energy imports in response to the invasion of Ukraine, calling it a counter to Russia “weaponizing” energy.

The bill is getting fast-tracked in the Senate, and the White House could rely on the legislation to ban imports, a move that would help share the blame for any price spikes.

A broad bipartisan majority of Americans think the United States should stop buying Russian oil, according to a Reuters/Ipsos poll completed on Friday. Some 80% of Americans – including solid majorities of Republicans and Democrats – support the measure.

Still, the White House is proceeding cautiously, concerned about a spike in gasoline prices that would add to decades-high inflation.

Americans are by far the world’s heaviest consumers of gasoline, thanks to big cars, long driving distances and little public transportation in many areas, and rising gas prices have traditionally been political poison for U.S. leaders.

The United States imported more than 20.4 million barrels of crude and refined products a month on average in 2021 from Russia, about 8% of U.S. liquid fuel imports, according to the Energy Information Administration (EIA).

White House economic adviser Cecilia Rouse noted that while the United States does not import much Russian oil, it is still reviewing a range of possible steps.

“What’s really most important is that we maintain (a) steady supply of global energy,” she said at the briefing, adding that the administration was “considering a range of options that we could take right now if we were going to cut” consumption of Russian energy.

Their comments come as oil prices have soared over the past week after the United States and its allies sanctioned Russia following its invasion of Ukraine.