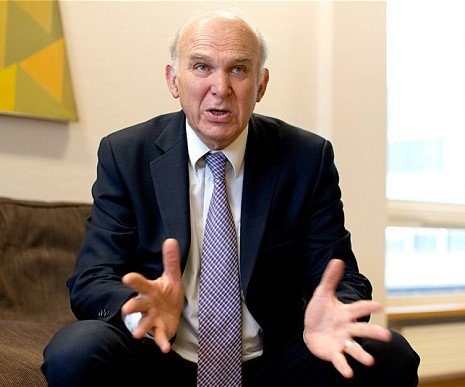 The transfers were made in relation to the Malabu oil deal, involving the controversial Oil Prospecting Lease (OPL) 245.

JP Morgan’s London branch had claimed it repeatedly sought consent from the Serious Organised Crime Agency (SOCA) to pay the fund into accounts linked to Etete. The bank said instead of being told to block the transfers, it was authorised by Soca to make the payment.

The revelations about the transactions were reported to be contained in the U.S. bank’s defence filed last week at the High Court against the $875 million damages claim by the Nigerian government.

Cable yesterday said he was shocked at the revelation. The leading opposition politician, who was Business Secretary at the time of the transfers in 2011 and 2013, said it suggested there was a weakness in the country’s anti-money laundering regime.

“I am shocked. This suggests serious weakness either in the UK’s anti-money laundering regime due to a lack of commitment or negligence,” Cable said.

The Lib Dem leader, however, added he will demand answers from the Home Office and the NCA.

JP Morgan Chase had acknowledged it knew that Etete, who was convicted of money laundering, would benefit when it transferred over $800 million proceeds from the sale of OPL 245 to a company he controlled.

The Nigerian government had filed a claim against the United States lender for more than $875 million, accusing the bank of negligence in transferring funds from the disputed 2011 oilfield deal to a company controlled by the former Minister of Petroleum Resources. JP Morgan made the acknowledgement in its legal response to the lawsuit filed by Nigeria.

The transactions were made by the U.S. bank when Royal Dutch Shell and Eni bought offshore oilfield OPL 245 from Malabu Oil and Gas in 2011. The $1.3 billion deal has spawned legal cases spanning several countries and involving Nigerian government officials and senior ENI and Shell executives, a number of whom would be facing trial in Italy on corruption charges next month.

According to the court document, JP Morgan was said to have received a request from the Federal Ministry of Finance in Nigeria to transfer more than $800 million to accounts controlled by the previous operator of the block, Malabu Oil and Gas, controlled by Etete.

The court papers filed in London in November 2017, on behalf of the federal government, had also alleged that JP Morgan acted with gross negligence by allowing the transfer of the money without further checks.