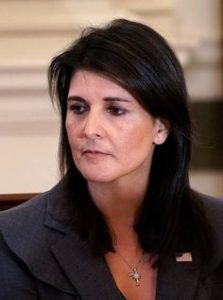 01 April 2018, News Wires – The UN Security Council has blacklisted 27 ships, 21 shipping companies and one individual for aiding North Korea in its effort to evade sanctions, the media reported on Saturday.

The latest restrictions were directed not just at North Korea’s shipping operations but Chinese companies trading with Pyongyang, reports the BBC.

The list includes 16 companies based in North Korea, five registered in Hong Kong, two on the Chinese mainland, two in Taiwan and one each in Panama and Singapore.

The US Ambassador to the UN, Nikki Haley said the latest measures were a “clear sign that the international community was united” in its efforts to increase pressure on the North Korean regime.

Friday’s measures were proposed by the US last month as part of a crackdown on the maritime smuggling of North Korean commodities such as oil and coal.

Sanctioned oil tankers and cargo vessels are banned from ports worldwide and businesses face an asset freeze, the BBC reported.

This is the UN’s largest ever package of designated penalties against Pyongyang.

The reclusive nation has been subjected to numerous rounds of international sanctions since 2006, which has cut off most of its exports and capped its imports of oil.