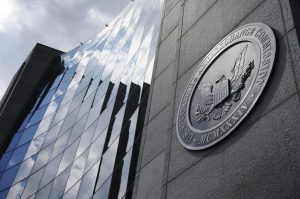 *An exterior view of the U.S. Securities and Exchange Commission (SEC) headquarters in Washington. REUTERS/Jonathan Ernst.

News wire — United States Oil Fund LP, the country’s largest crude exchange-traded fund, is being investigated by U.S. regulators over whether its risks were properly disclosed to investors, Bloomberg reported on Friday.

The Securities and Exchange Commission and the Commodity Futures Trading Commission have opened probes into the $4.64 billion fund, which lost 75% of its value in the two months ended April 30, the report said, citing people familiar with the matter.

Issues that are being examined include whether shareholders were adequately informed that the ETF’s value would not necessarily move in tandem with the spot price of oil and the fund’s recent decision to purchase crude contracts that expire further out in the future, Bloomberg reported.

The inquiries are in their early stages and may not lead to allegations of wrongdoing, Bloomberg said, adding that United States Commodity Funds, the company that manages USO, has not been accused of any misconduct by the SEC or the CFTC.

The SEC declined to comment on the report, while the CFTC and United States Commodity Funds could not be reached for comment.