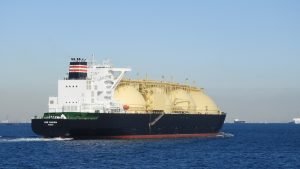 24 April 2018, News Wires – Dominion Energy’s Cove Point LNG export terminal in Maryland, the second US facility to produce LNG from shale gas, has reportedly shipped its first cargo of the fuel to Japan.

LNG tanker Sakura, the first of many to Japan, departed from the new Dominion Cove LNG export terminal in Maryland on April 22, according to a brief statement on Monday posted on the official Twitter account of the US Embassy in Tokyo.

To remind, the first commercial cargo from the $4 billion Cove Point LNG plant with a capacity of 5.25 mtpa left the facility earlier this month onboard the Adam LNG carrier.

ST Cove Point, a joint venture between Japan’s Sumitomo Corporation and Tokyo Gas booked 2.3 mtpa of LNG produced from the plant for a 20-year term.

The remaining 100,000 tons of LNG will serve as a buffer for Tokyo Gas and Kansai Electric enabling them to cope with seasonal fluctuations.

Sumitomo said previously that the first shipment to the world’s largest LNG importer Japan would be shipped late April adding that it would land at Tokyo Gas Negishi LNG receiving terminal located in Kanagawa prefecture.